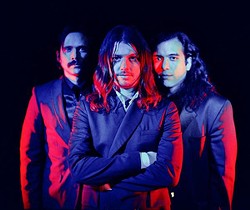 
After forming the moody space-rock band the Secret Machines in 2000, Dallas-born brothers Brandon and Benjamin Curtis moved to New York to begin recording. Two full-length albums later, just as the band was finding its niche with 2007’s Ten Silver Drops, Benjamin left to focus on his side project, School of Seven Bells. Guitarist Phil Karnats came to the rescue and the Secret Machines rebooted, recapturing the band’s complicated aura with a self-titled album full of abstract sound collages and deep messages about self doubt and “fearlessly confronting emptiness.” If you had to describe their sound to your parents, it’s definitely rock music — but with cryptic song titles like “The Walls Are Starting to Crack,” periods of noisy static, and a musical style they describe as “de-evolution,” these dark horses create more of a conceptual soundtrack than anything else. P.S. The band’s love for theatrics and haunting light shows will no doubt push the mysterious envelope at Thursday’s show. 8 p.m., The Ten Eleven, 1011 Avenue B., San Antonio, theteneleven.com