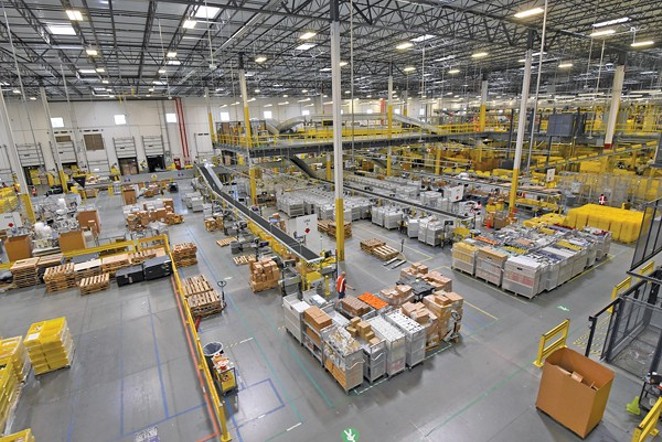 Flickr Creative Commons
As Amazon works to develop at least one new San Antonio distribution center, a new investigation shows the rate of serious accidents among workers at its pair of other large facilities serving the city are double the industry rate.

An investigation by Reveal from The Center for Investigative Reporting documented alarming injury rates at more than 150 Amazon fulfillment centers nationwide. The story, which drew on internal company data from 2016 through 2019, suggests the online retailer's focus on speeding up and automating processes has turned its facilities into "injury mills."

About 1 in 10 workers at Amazon's warehouses in both Schertz and San Marcos  experienced serious injuries on the job last year, according to Reveal's analysis. The average rate of serious injury for warehousing and storage work is only 4 per 100 workers, according to the Bureau of Labor Statistics.

Amazon officials said they prioritize the safety of their workers, adding that the company spent $1 billion this year on safety programs amid the COVID-19 pandemic. The corporation also expanded its safety team to more than 5,000 staffers and uses data tracking to come up with new ways to protect employees.

"While any incident is one too many, we are continuously learning and improving our programs to prevent future incidents," spokesman Daniel Martin said in a statement emailed to the Current.

Even so, Amazon employees in other markets have expressed frustration with the pace of the warehouse work and warned of its consequences.

"Amazon doesn’t want any long-term workers," an employee at an Amazon facility in Oregon told the Portland Mercury last year, after a portion of the Reveal data was made available. "They want you to work hard and fast and get rid of you when your body can’t take it anymore. That’s their business model."

Amazon's large-item warehouse in Schertz, just north of the Alamo City reported 9.2 serious injuries per 100 workers in 2019, according to Reveal's data. That figure is down from 10 injuries in 2018, but up from 8.7 the year prior to that.

While Amazon also has smaller operations around the Alamo City, Reveal said it excluded data from warehouse operations whose lower number of worked hours could artificially inflate injury rates.

There are also signs Amazon could be behind a $200 million, 3.8-million-square foot "fulfillment center" planned for East Bexar County. The owner listed on state documents related to the project is linked to Seefried Industrial Properties Inc., which has developed past Amazon warehouses, according to media reports.

The expansion of online delivery during the pandemic is fueling the demand for more warehouse space for Amazon and other online retailers.

While the injury rates at Amazon's two large San Antonio-area warehouses exceed national rates, they aren't among the worst in the company. That distinction belongs to a site in DuPont, Washington, which reported 22.4 serious injuries per 100 workers last year.

A total of 15 Amazon sites had 12 or more serious injuries per 100 workers in 2019, according to Reveal's investigation.