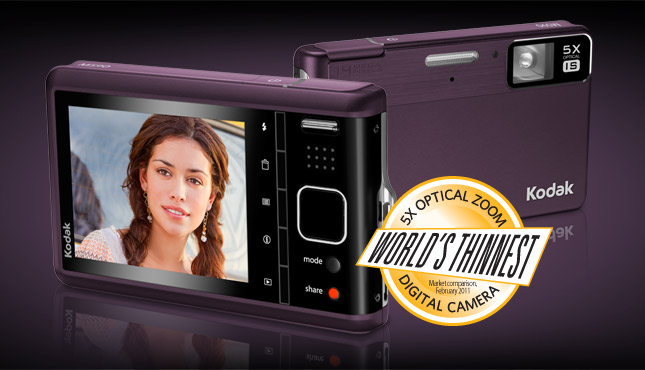 Product: Kodak EasyShare M590 Promise: Saves you precious upload time with its Share button, connecting and allowing you to post directly to YouTube, flickr, facebook, orkut, and Kodak Gallery and send via email from the camera. Break-down: We opened the box and started poking around.  First thing we noticed: it's listed as the world's thinnest 5x optical zoom digital camera.  Nice, if it's functionality isn't effected by it's petite frame. So, we headed outside to test the camera's abilities as a traditional point-and-shoot.  The Smart Capture function, admittedly, is pretty smart.  Walking around outside allowed us the ability to test out the various lens functions and play with the auto-focus.  For those who get easily frustrated with buttons, settings and tech jargon, it takes point-and-shoot simplicity to a whole new level. One odd thing we noticed right off the bat: the wide angle / telephoto (zoom focus) button goes up and down instead of the standard left and right.  Maybe we're just spoiled, but it definitely caught us off guard.  We talked to Kodak, asked "what's up" and got a reasonably reasonable response: "We designed the M590 [to be] as portable and stylish as possible."  The zoom function's button-ry allows for minimum space while still maintaining functionality.  "Bulky cameras make it hard to fit in a cramped purse or jacket pocket [users] are more likely to want a compact camera they can pull out of a pocket and quickly snap a photo." On the side of the box are a few recommendations: SD card, extra battery and case.  If you're anything like us, you'll fill up the camera in, oh, 8 minutes flat and deeply regret not having an extra memory card on hand.  We did our recording in HD (1280 x 720) and got about 2.5 minutes of video on the internal memory before reaching capacity. Installing the Easy Share application: easy enough. Launching it: easy enough. Tagging people in photos from the camera's interface wasn't hard and uploading was actually really easy.  If you didn't want to edit your video or photos first.  The direct-to-YouTube upload isn't my favorite way of getting things online, and the option still exists to dump media to your hard drive directly. In a nutshell: It's not going to replace your professional-grade camera and video equipment, but that's not what it wants to do.  It's super-simple interface was intuitive enough to pick up, figure out and start shooting in less than a minute and the instant sharing function is cool if you don't want to edit your media first.  Plus, as Kodak was quick to point out and we were thrilled to experience: it fits into even the tiniest pocket. Photos from the walk around the block with our new friend the M590:
click to enlarge