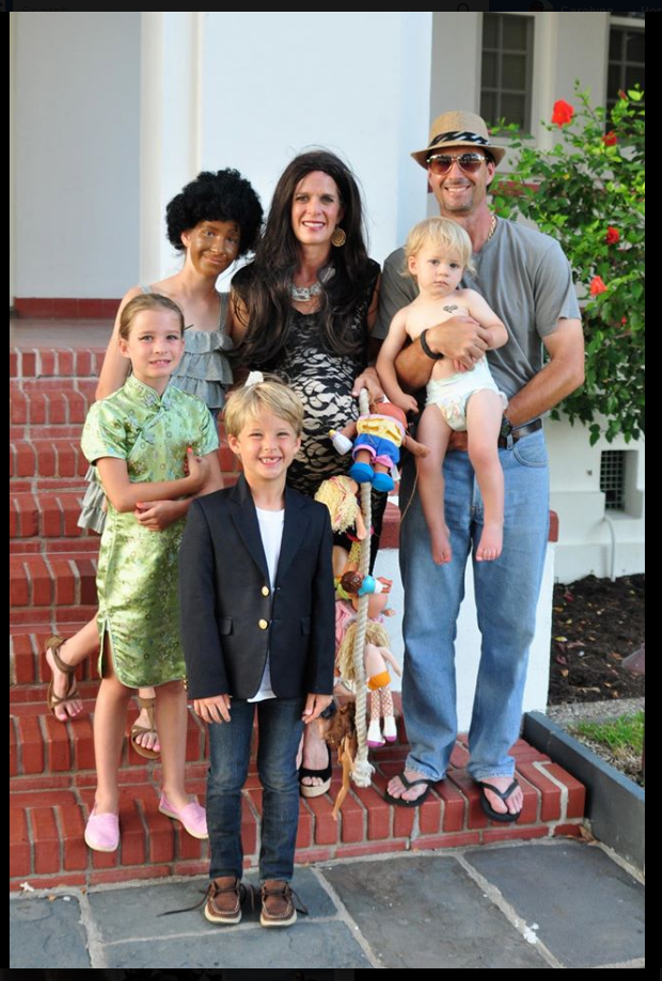 Imgur / presentationodd
A Reddit user posted a link to this photo, identifying it as a Facebook profile picture of SNIPSA Executive Director Shannon Espy.
The flood of San Antonians being outed for racially insensitive behavior past and present has locals wondering: "Who's next?"

On Saturday, Reddit user PresentationOdd posted a link to an image to the San Antonio subreddit that shows a family photo with a teen in blackface.

In the post, the user identified the adults as Shannon and Benjamin Espy — respectively, the president/executive director and vice president of local nonprofit animal rescue SNIPSA — and stated that the photo was taken from Shannon Espy's Facebook profile. The post included a link to a saved version of the photo — which now appears to have been removed from Facebook — as well as a screenshot of the profile.

A poster who appeared to be Shannon Espy responded, saying that the family was dressed as the Angelina Jolie-Brad Pitt family, including its adopted multiracial children. In hindsight, the decision to have the children dress as they did was wrong, she added.

"I am embarrassed about my decision that led to this picture and that I subsequently chose to post it," the poster also said.

In the photo, a teen wearing blackface and an afro wig is standing next to a younger child wearing a Chinese silk dress. The adult woman, identified in the post as Shannon Espy, is holding a rope with baby dolls tied to it, which commenters on the post said was suggestive of the "anchor babies" slur.

Imgur / presentationodd
A screenshot of the Facebook profile photo.
"President Shannon Espy of SNIPSA, which is a nonprofit animal shelter here in San Antonio, is posing with her family and her husband Benjamin Espy who is also VP on the board of the nonprofit," PresentationOdd's post reads.

"One of the people in the pic is in blackface. Their theme seems to be dressing as different races? Looks pretty racially insensitive, and this is her fb profile pic."

"The photo includes my husband, me, and our four minor children from nine years ago. The photo was taken at an intimate gathering with the theme 'Dress Like Celebrities.' Our family chose to dress like the Angelina and Brad Pitt family as we shared the same number of children and we had deep respect for the diversity in their family. In hindsight, however, I recognize that the decision to have our children reflect the different races of the Pitt family was wrong."

The post continues: "I joined Facebook in 2012 and posted this photo at that time. I am rarely ever on Facebook and have only posted a handful of times since joining. I am embarrassed about my decision that led to this picture and that I subsequently chose to post it. I want to be clear, I have devoted my life and career to improving the lives of others. I continue to learn, listen, and desire a better and more just community for all. I will learn from this mistake and I am committed to continuing to improve and becoming the best version of myself."

The Current reached out to SNIPSA for comment as well as verification of whether the Reddit comment was posted by Shannon Espy, but did not receive a response as of press time.