Given both current political realities and Cornyn's track record, there's plenty of reason to be skeptical. 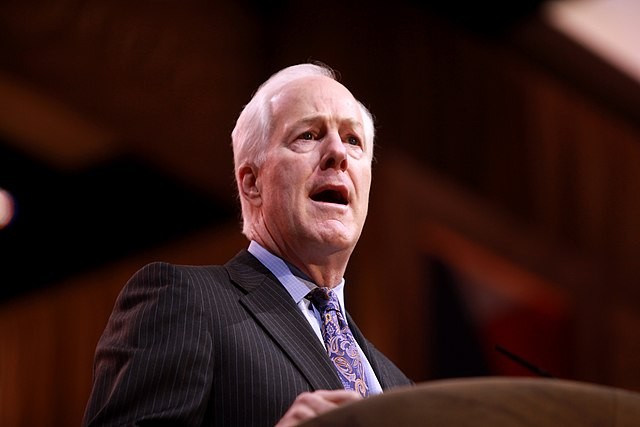 The letter, which ran Sunday as a full-page ad in the Dallas Morning News, specifically urges lawmakers to support "red flag" laws, expanded background checks and raising the age to purchase a firearm to 21. “Most law enforcement experts believe these measures would make a difference,” the letter reads.

Significantly, the letter praises Sen. John Cornyn, R-Texas for leading bipartisan negotiations on gun reform in the wake of the shooting rampage that killed 19 children and two teachers.

“He’s the right man to lead this bipartisan effort, as he has demonstrated throughout his career," the signers note.

Sunday's open letter increases the pressure on Cornyn, who's overseeing a bipartisan group trying to get reforms through a Senate mired in partisan gridlock. Much of that gridlock has been thanks to his own party's obstructionism.

Given both current political realities and Cornyn's track record, there's plenty of reason to be skeptical.

Last week, Cornyn told Politico that “it will be embarrassing" if the Senate can't find common ground for legislation after Uvalde, the state's worst school shooting and the nation's worst behind Sandy Hook.

“It would feed the narrative that we can’t get things done in the public interest,” said Cornyn, a former Texas attorney general.

Connecticut Sen. Chris Murphy, the Democrats' lead negotiator told CNN this weekend he's "more confident than ever" lawmakers will actually get something done. Even so, he noted that he's "more anxious about failure."

Such statements could be read as reason for cautious optimism.

However, the fact remains that Cornyn was appointed as the GOP's chief liaison in the talks by Senate Minority Leader Mitch McConnell, whose tenure has largely been about obstruction and sabotage of Democrats' goals.

And Cornyn, a loyal McConnell lieutenant, has his own history of obstruction. In 2006, after promising to reach across the aisle on immigration reform, the senator inserted a “poison pill” amendment into a bipartisan bill that would have become the most significant such overhaul in 20 years.

That about face prompted Frank Sharry, executive director of progressive group America’s Voice, to dub the Texas lawmaker's strategy of staking out middle-of-the-road positions then pivoting the "Cornyn Con."

“You make it look like you’re trying to get to ‘yes,’ then you try to pull the rug out from underneath anyone who actually does want to get to ‘yes,’” Sharry told the Current in 2020.

A look at Cornyn's campaign contributions also raise questions whether he's ready to stand up to the National Rifle Association, which has repeatedly dug in its heels against even the most modest reform of gun laws.

Between 1989 and 2022, Cornyn accepted $340,325 in contributions from gun-rights groups, making him the member of Congress who's reaped the third-largest total windfall from pro-gun organizations, according to the nonpartisan group Open Secrets, which tracks money in politics. Only Sen. Ted Cruz, R-Texas, and U.S. Rep. Steve Scalise, R-Louisiana, have taken more.

But those monetary contributions are only part of the story when it comes to the NRA's power. Much stems from its ability to mobilize the GOP base. And there's also reason to question Cornyn's willingness to make waves on that front.

Last week, after right-wing radio jock Joe Pagliarulo fretted on Twitter that Cornyn might impinge on gun ownership, the senator fired back the assurance "not gonna happen."

We'll know in the next few weeks whether there's any serious headway in the Senate talks. Democratic leaders said they're unwilling to let them drag on.

In the meantime, Texans concerned about turning the tide on an epidemic of mass shootings are best to adopt the same skepticism about Cornyn's leadership as that of Texas Sen. Roland Gutierrez, who's district includes Uvalde.

"I’m hoping that Cornyn listens. I’ve known John Cornyn since I was a kid, since I was a law student," Gutierrez told Democracy Now. "I used to deliver his books when he was a district court judge, to his courtroom. I asked him last week when I saw him, I said, 'Senator, we need something.' And, you know, he told me what these people always tell me, you know: 'Well, we’re working on it.' You know, it’s just not good enough. It’s not good enough. I mean, we need to do something better than what we’re doing, and it’s just not there."