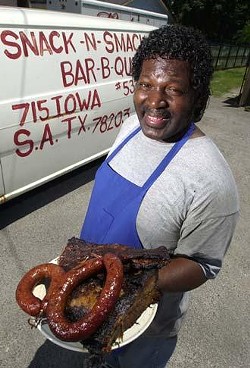 
The best way to find Paul Brooks on any given day in East San Antonio is to follow the smell of mesquite smoke - or to park in front of his cookhouse at 715 Iowa St. and wait for him to drive up in one of his white vans that bears the name of his business in red, hand-lettered paint.

"I like to snack on different things, and I smack when I eat," Brooks explains to anyone curious about how his business got its name. "I'm a food lover, you can see how big I am."

After he loads up a portable barbecue pit with mesquite wood and lights it, Brooks wraps a rack of marinated pork ribs in aluminum foil and lays it on the grill. He then hitches the pit to a van that bears the Snack & Smack Bar-B-Que sign, and pulls it into the parking lot of the Government Hill restaurant. The smoke attracts loyal customers who come for a barbecue plate with a choice of soul food sides: rice, spinach, beans, mashed potatoes, corn, cabbage, chitterlings, yams, black-eyed peas, homemade macaroni and cheese, and bread, all for $5.50.

The vegetable sides are mostly left unseasoned to allow customers to add their own salt, pepper, or Cajun pepper sauce. A glass of "Ghetto Juice" (iced tea) is extra, and customers are welcome to take their food to go, or sit at one of several booths, tables, or picnic tables in front of the window air-conditioner and a corner television.

As the meat is slowly cooked over mesquite, Brooks occasionally pulls it out and splashes on a mop, a concoction of beer, lemon juice, vinegar, water, onion, and his own recipe for brisket rub. "The mop keeps the seasoning tied to the meat," he explains. The mop is cooked for a while on a gas stove, until the onion and lemon have dropped to the bottom of the saucepan, and then rise to the top again.

Recently, when Hurricane Claudette was moving cooling breezes and rain into the area, Brooks piled several pieces of wood into a cardboard tray, sprinkled ashes over the top of the heap, and poured charcoal lighter fuel onto it. The ashes, Brooks said, kill the taste of the charcoal lighter fluid. After loading it into the barrel pit, he lit it, waited for it to catch fire, and then piled bigger pieces of mesquite. "I prefer seasoned mesquite wood, which is supplied from Poth."

After the meat is ready to serve, a splash of barbecue sauce made from syrup, beer, ketchup, and other ingredients puts the finishing touch on the delectable ribs, brisket, or sausage. Brooks recommends sideswiping the barbecue sauce on the meat instead of just ladling it on.

"Everything around here is done the old-fashioned way," Brooks says. Originally from Shiner, the Bar-B-Que proprietor would frequently accompany his father and uncles on fishing trips, where they taught him how to barbecue. "I wouldn't let them run me off."

Brooks came to San Antonio in 1985. He worked at the Sunshine Nut Co., then at Pace Foods, until it laid its employees off and relocated to Paris, Texas. By then, he had saved enough money to invest in his cookhouse and to open the restaurant on New Braunfels Avenue. Although barbecue and the accompanying soul food are principally served at that location, his neighbors on Iowa Street can drop in when Brooks is working in his cookhouse for a sausage on a stick or a cold 16-ounce Miller. He keeps a picnic table under a shaded area for local customers who want to get out of the hot sun and visit for a while as Brooks applies mop to the meat or stokes up the fire in the smoker.

Alex Fulton, originally from Weimar, came aboard with Brooks about a year ago. He has been cooking soul food for about 30 years.

"Soul food is what most black people like to eat," Fulton tells the uninitiated. "I figure black people have soul." Fulton says he would hang around in his mother's kitchen when he was growing up, and learned how to cook. "I don't have to depend on a woman to cook for me. Most young women these days don't know how to cook."

Brooks cooks 24 hours a day at his cookhouse on Iowa Street, but fires up the Big Boy, a large brick barbecue pit in the back yard of Big Mama's on Fridays and Saturdays, when the place gets crowded. Food is served in a cafeteria-style serving line, beginning around 11 each day.

Besides brisket and ribs, Brooks offers Elgin, Shiner, Weimar, and Gonzalez sausage. "The Gonzalez sausage is popular among the black population in San Antonio. The best sausage is from Gonzalez. It has its own ingredient - it's been that way for 50 years."

The Snack & Smack Bar-B-Que and Big Mama's Soul Food might have been a well-kept secret on the near East Side of San Antonio. But the word is out. The barbecue that Brooks cooks for six days a week is a must-try for the barbecue aficionado and for people who live to eat soul food. •