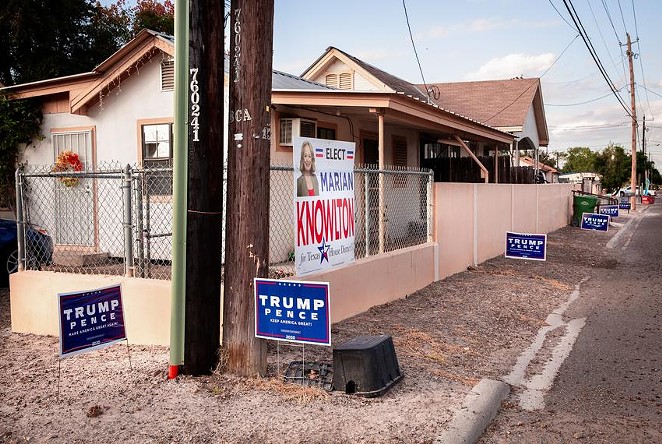 After President Joe Biden underperformed there last year, national and state Republicans charged into the 2022 election cycle determined to show they can make inroads in the predominantly Hispanic region. Speaking Thursday in Austin, Gov. Greg Abbott predicted “a very red future for the border communities in the state of Texas.”

While the proposed maps hold some good news for Republicans targeting South Texas, they also introduced a number of uncertainties.

Gonzalez told the Texas Tribune this week that all options were on the table with regard to his political future. And in a statement Friday that was first reported by Politico, Gonzalez said he will “very seriously” consider running in the new 34th District if those are the final boundaries. Gonzalez would have the support of Vela, Vela confirmed to the Tribune after first telling Politico.

All the maps released this week are initial drafts and subject to change, either before they reach Abbott’s desk — or after, as they face an all-but-guaranteed barrage of legal challenges. But they have already set off a burst of speculation among political insiders.

If Gonzalez switches races, he would encounter a Democratic primary in the 34th District that already includes at least one prominent contender in Rochelle Garza, a former staff attorney for the American Civil Liberties Union of Texas. Besides Gonzalez, another potential Democratic candidate for the 34th District is state Rep. Alex Dominguez of Brownsville.

Dominguez is “seriously considering” a run for higher office, including for the 34th District, according to a spokesperson, Logan Davidson. Davidson said that Dominguez is currently focused on redistricting as it relates to his state House seat, but that he has already hired a consulting team to help with whatever he may do next.

Gonzalez has been under new national GOP scrutiny since he had an unexpectedly close race last year, winning reelection by just 3 percentage points while Biden carried the district by less than that. Gonzalez’s 2020 Republican challenger, Monica De La Cruz-Hernandez, is running again with the support of the top Republican in the House, Minority Leader Kevin McCarthy of California.

The current 15th District is one of three in South Texas that the National Republican Congressional Committee said in February it would target this cycle. The other two were the 34th District and the 28th District, currently held by U.S. Rep. Henry Cuellar, D-Laredo.

Asked Friday if the NRCC still considered the three districts competitive, a spokesperson did not exactly say.

“Every Democrat is vulnerable because of their record of complete and total incompetence that has created a border crisis, caused the cost of goods to skyrocket and made communities less safe,” the spokesperson, Torunn Sinclair, said in a statement.

The best-known Republican candidate for Vela’s seat, Mayra Flores, has no plans to switch races — but is not pleased with the proposed bluer district. She traveled to Austin on Thursday to testify against the map proposal, telling GOP lawmakers it seems they are “sending the message of not really caring about the conservative Hispanics in South Texas.”

“We have worked very hard in District 34, so I don’t understand why the Republican committee … sets us back,” Flores told the Senate Redistricting Committee. She added she did not want candidates of either party to have the seat handed to them and implored lawmakers to revise the proposed district.

The GOP chair of the committee, Sen. Joan Huffman of Houston, praised Flores for her heartfelt testimony but didn’t indicate whether a revision would happen.


The proposed maps also brought new intrigue for state legislative contests in South Texas. Some Republicans have openly speculated that redistricting could force Democratic state lawmakers in South Texas to switch parties, with Land Commissioner George P. Bush saying last month that he “suspect[s] during redistricting you’re gonna see a lot of announcements of conservative Democrats come over to our side.”

There were no immediate signs of that after the initial maps came out this week.

The Senate map proposes a less blue 27th District for Sen. Eddie Lucio Jr. of Brownsville, a moderate Democrat favored by the Senate’s hard-right presiding officer, Lt. Gov. Dan Patrick. But Lucio, who survived a brutal primary challenge from his left last year, is showing no signs of backing down from fighting for another term in his current party.

Lucio announced in June that he would seek reelection to his current district, and a spokesperson, Ruben O’Bell, confirmed Friday that was still the plan, with Lucio running in the Democratic primary for Senate District 27 next year.

However, only one of those districts moved significantly in the GOP’s direction under the proposed map released Thursday. The district, represented by state Rep. Ryan Guillen, D-Rio Grande City, would see a striking swing in favor of Republicans, morphing from a district that Trump already carried by 13 points to one he would have routed by 25.

Guillen’s office has not responded to requests for comment on his 2022 plans.

One of the targeted South Texas districts — that of state Rep. Eddie Morales Jr., D-Eagle Pass — actually becomes bluer under the proposed map, but is still competitive. It would transform from a district that Trump won by 8 points to one that Biden would have carried by 1.

Morales intends to run for reelection in his current district regardless of redistricting, according to his office.

“ART remains confident in our strategy and efforts to win seats in 2022,” the group’s vice president, Aaron De Leon, said in a statement.

There is a newly open seat in South Texas after state Rep. Eddie Lucio III, D-Brownsville — the son of the state senator — announced Friday morning he would not seek reelection. However, that seat looks like an uphill climb for Republicans. Biden carried it by 15 points, and the proposed map gives the district the same Biden margin.

Eddie Lucio III said in a statement Friday morning he was hoping to “start this next chapter in my life with a focus on family, friends, and business.” His spokesperson, Sergio Cavazos, later made clear the outgoing state representative would not participate in any of the political musical chairs in South Texas, saying he is “not planning on running for any other elected office this cycle.”

Disclosure: Politico has been a financial supporter of The Texas Tribune, a nonprofit, nonpartisan news organization that is funded in part by donations from members, foundations and corporate sponsors. Financial supporters play no role in the Tribune’s journalism. Find a complete list of them here.