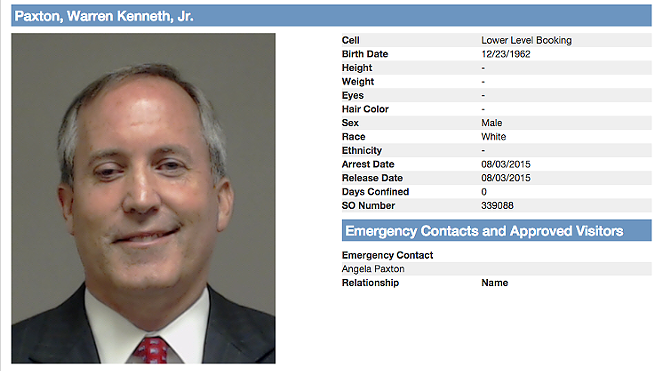 Turns out openly calling for government officials to flout a U.S. Supreme Court decision isn't a problem as far as the State Bar of Texas is concerned.

Last week, state bar officials dismissed a complaint against Texas Attorney General Ken Paxton that had accused him of committing "professional misconduct" when he told county clerks across the state they could still turn away same-sex couples seeking marriage licenses even after the Supreme Court's landmark marriage-equality ruling. The August 3 dismissal letter, first obtained by the Texas Tribune, says the state bar's chief disciplinary counsel has "determined that there is no just cause to believe that [Paxton] has committed professional misconduct."

When the marriage-equality ruling dropped last summer, Paxton responded about as well as you'd expect — by throwing sand into the gears and sowing confusion that led to long waits for same-sex couples seeking marriage licenses in some pockets of the state. Anticipating a High Court ruling that went beyond Texas' conservatives' "Adam and Eve, not Adam and Steve" views on marriage, Lieutenant Gov. Dan Patrick did his part by asking Paxton for an AG opinion on how state officials should respond to a same sex marriage-affirming ruling the day before the Supreme Court issued its opinion on the matter.

This complicated things for county clerks across Texas facing couples who wanted licenses after waiting years, decades in some cases, for the legal right to marry. Paxton's public comments, naturally, turned out to be more political invective than legal advice. The day of the Supreme Court's ruling, he issued a statement saying, "no court, no law, no rule, and no words will change the simple truth that marriage is the union of one man and one woman.” Two days after the ruling, he issued his official guidance to county officials, in which he repeatedly called the Supreme Court “lawless” and the court's gay-marriage decision “flawed.” He also told clerks this:


It is important to note that any clerk who wishes to defend their religious objections and who chooses not to issue licenses may well face litigation and/or a fine. But, numerous lawyers stand ready to assist clerks defending their religious beliefs, in many cases on a pro-bono basis, and I will do everything I can from this office to be a public voice for those standing in defense of their rights.


The group of lawyers, former state bar directors and judges who filed the grievance against Paxton argued that not only did Texas' top lawyer encourage clerks to discriminate against gay couples, but that in telling officials to violate a Supreme Court ruling he'd also broken his professional oath to “preserve, protect, and defend the Constitution and the laws of the United States.”

The state bar evidently disagrees. Which must be a slight relief for Paxton, whose legal woes have come to define his maiden voyage in statewide office.