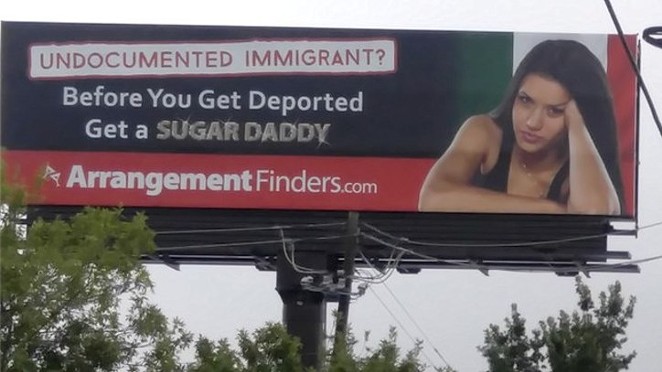 Twitter
Forget Trump or Clinton's immigration policies, a national dating site has a new solution for women threatened with deportation: Make a "mutually beneficial agreement" with a creepy rich guy. Arrangementfinders.com's new South Austin billboard makes their message impossible to miss: "Undocumented immigrant? Before you get deported, get a Sugar Daddy."

The website—with the slogan "Intimacy with a twi$t"—is meant to connect wealthy men with largely low-income women who will trade their time, attention, and, potentially, bodies for financial security.

Austin was one of the few metropolitan regions to allow the billboard. "All the major markets in terms of Los Angeles, San Diego, Phoenix and Dallas [read: areas with Latino immigrants] rejected us," Jacob Webster, chief marketing officer for arrangementfinders.com, told Dallas Morning News.

Webster told Austin's Fox affiliate that the idea for the billboard came directly from Trump's promise to deport all undocumented immigrants. And, according to Webster, hispanic women make up a third of arragementfinders.com's customers.

This isn't the company's first billboard-sized offense. In 2013, two ads were taken down in Chicago and Los Angeles for their explicit, insulting messages. On one: "Hey Students, Need a Summer Job? Date a Sugar Daddy" And the other: "Because the best job is a blow job."