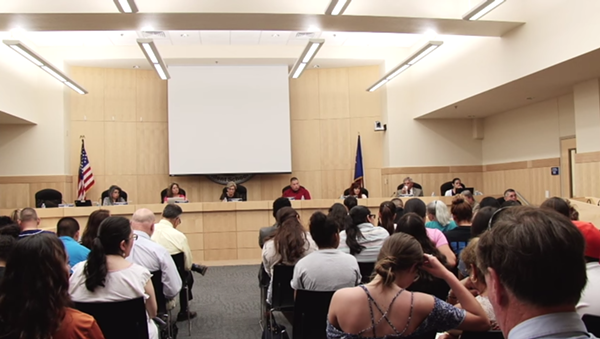 YouTube screenshot
At this June 15 meeting, the South San ISD attempted to discuss the role of Texas Education Agency Conservator Judy Castleberry in closed session.
Micromanagement. Refusal to work with a superintendent. No governance and financial mismanagement.

These are the themes that run through four months of reports on the South San Antonio Independent School District by conservator Judy Castleberry, who was appointed to oversee the district by the Texas Education Agency in February.

The appointment came after South San ISD hired its fifth superintendent in five years, Dr. Abelardo Saavedra, who, in 2014, came out of retirement with the belief that he could turn the district around. But By December 2015, Saavedra was so frustrated with the South San board of trustees, which included a new board with longtime South Side politician Connie Prado as its president, that he filed a complaint with the TEA, requesting intervention. Saavedra did not respond to repeated requests for comment from the Current.

Typically, conservators write quarterly reports, but because of the situation between the board and Saavedra, Castleberry said TEA Commissioner Mike Morath requested monthly reports. Morath may appoint a board of managers to oversee the district if the conservator does not see progress.

“As I’ve said in my report, I don’t see a high level of commitment. I don’t see a commitment from this board to address the issues that are identified,” Castleberry told the Current. “I don’t know how long the commissioner may be willing to just watch that.”

TEA spokeswoman DeEtta Culbertson said conservator appointments are rare. Aside from South San, just two other school districts in Texas have conservator appointments. Morath appointed a board of managers at Edgewood ISD, on San Antonio’s West Side, in March after an investigation determined the school board’s ability to govern deteriorated and it failed to work with administrators. At Progreso ISD, in the Rio Grande Valley, Morath appointed a conservator because of rampant corruption within the district.

In her most recent report, Castleberry again scolds the board for failing to work with Saavedra. This time, it was for scheduling an excessive number of performance evaluations, which she ordered reduced. She also chastised the board for its year-long conflict with Saavedra over stipends for longtime teachers of the district who have master’s degrees. Saavedra wanted to reduce those stipends, which were as high was $8,000, and provide incentives for those educators to retire. Castleberry also says the board won’t address excessive costs relating to under-utilized facilities.

“The Board refused to address the issue of drastically under-utilized facilities, obligating the District to another year of excessive operational costs,” she wrote.

“I think they don’t make sense,” she said.

Prado also accuses Castleberry of overstepping her legal boundaries. In a 12-page rebuttal to Castleberry's report sent to Morath in May, Prado contends the board is in full compliance with all of its legal and regulatory responsibilities.

At a June 15 board meeting, Prado attempted to hold an executive session to discuss the role of the board and the superintendent. What wasn’t written was the Prado also wanted to discuss the conservator’s role. Castleberry refused to participate, saying the language of the agenda item didn’t include her so it was improperly posted.

“I’d be glad to have the discussion in open session,” Castleberry said. “But I will not participate in closed session.”

Prado directed staff to rewrite the agenda item for a future board meeting.
However, despite repeated evaluations scheduled for Saavedra, who filed the complaint that largely deals with the board, despite the fact that TEA appointed a conservator and is investigating the district, Prado says the board and administration are on the same page.

“The relationship with the superintendent is going very well, contrary to what [Castleberry] says,” Prado said. “Since he came on board, we’ve worked very well together.”

South Side Councilman Rey Saldaña, who has long advocated for TEA intervention in the district, says the fractured relationship between the board and the administration is indicative of long-term problems in the district.

“I think over time, what tends to happen in a district like South San is that it always … reverts to zero. It always auto corrects back to the status quo, which is a board that is micromanaging the administration day to day,” Saldaña said. “Hiring, firing, signing contracts, those decisions are best left to the superintendent who can handle them. This school board has a muscle memory about getting engaged in areas where they don’t have expertise."

Saldaña’s public criticism of the board has also made him a target of anonymous political operatives on the South Side as well. In May, fliers started appearing on doors in the district that accused Saldaña of using South San’s problems as a talking point for a possible mayoral bid in 2017.

“Saldaña’s model is the same devious plan that the business community used some years back in the San Antonio ISD when Saldaña was still in diapers,” the flier stated. “Saldaña is determined to make a name for himself and establish one of his mayoral platforms on the backs of South San kids and teachers.”

Saldaña established a group earlier this year called South San Kids First — a watchdog group that focuses not only on the board, but on the superintendent as well.

“We need to fill that void, let’s be real,” Saldaña said. “We’ve got hard working blue collar families who can’t make it to school board meetings, can’t advocate because they don’t have the time. There’s no welcoming atmosphere for people to come in and ask more for kids, compared to high performing school districts with greater parental environment.”

But like Saavedra and Castleberry, any effort to scrutinize the board is met with political attacks. “Someone consistently running against me by some family or person connected to that school board.”

He hopes Morath appoints a board of managers and thinks it is a real possibility. “I have no doubt that the way things have always been is not working,” he said. “So there’s nowhere to go from here but up.”