A new Texas Department of Agriculture report also points to other factors that are making it harder for Texans to access and afford food, including wages falling behind rising costs of living. 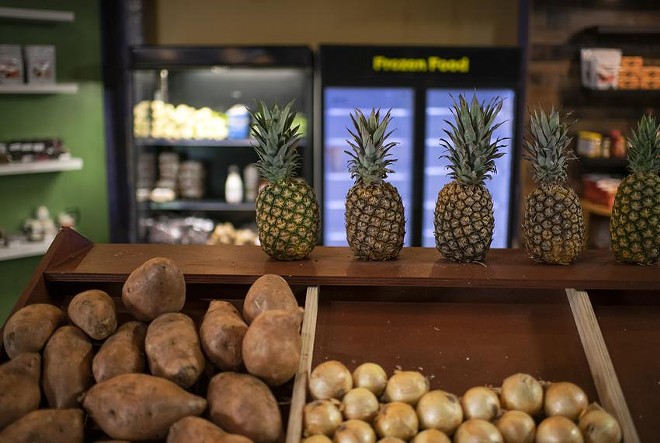 Texas Tribune / Mark Feliz
Produce at District Market Green Grocer in Houston on May 18, 2022.
On the heels of a historic drought that devastated crops from the High Plains to South Texas, a new Texas Department of Agriculture report released Tuesday linked climate change with food insecurity and identified it as a potential threat to the state’s food supply.

The food access study, coordinated by the TDA and the University of Texas Rio Grande Valley, notes that “climate instability” is strongly associated with soil loss, water quality, droughts, fires, floods and other environmental disasters. 2022 was one of the driest years on record for Texas, and about 49% of the state was still in drought conditions at the end of December. The drought resulted in failed crops, low yields for farmers and diminished grazing, which forced ranchers to cull their cattle and led to the highest amount of livestock sales — nearly $2.7 million — in more than a decade.

“From the agricultural perspective, concerns were expressed regarding droughts, drying up of artisanal wells, water use restrictions, fire threats and dangerous conditions for farm workers,” the report says.

“We’re seeing longer periods without any precipitation, then when it does come, it’s in shorter, more intense bursts,” he said.

In total, Texas received a similar amount of precipitation in 2022 as in 2021, but most of that precipitation came all at once at the end of the summer.

Much of the state went through the worst of the drought conditions from June to August, during the high heat of the summer while plants are still growing. This was a sharp contrast to the torrential rainfall totals that followed. At the end of August, the Dallas-Fort Worth area was hit with a 1,000-year flood that brought 13 inches of rainfall in 18 hours.

“It is very difficult being a producer to have high and consistent yields with this kind of weather whiplash of extremes,” Murphy said. “It’s extremely difficult to prepare for a precipitation pattern that features long periods of near zero rainfall and short periods of extreme precipitation.”

The report recommends several actions, including having farmers work alongside researchers and policymakers, creating more food forests that allow trees to restore soil health and improve water quality, and strengthening bonds between local farmers and businesses to boost the farm-to-school infrastructure.

The report, which was submitted to the Texas Legislature on Dec. 31, also points to other factors that are making it harder for Texans to access and afford food, such as wages falling behind rising costs of living and lack of access to food in rural areas. Another issue is organizations being unaware of others with similar goals; for example, the report notes that certain grocers are interested in expanding delivery services into rural markets, while several food banks have acquired trucks to do the same.

The study includes suggestions that lawmakers could consider to help more Texans have consistent food access, such as expanding online and delivery options for Supplemental Nutrition Assistance Program participants and allowing more stores to accept those benefits.

The report also recommends raising the minimum wage, citing the Massachusetts Institute of Technology’s living wage model, which estimates the hourly rate individuals must earn to support themselves and their families in each state. According to MIT, in a Texas household with two parents and a child, each adult needs to make $17.44 an hour to meet their basic needs. The minimum wage in Texas is $7.25 an hour.

According to the report, meeting the living wage draws the line between “the financial independence of the working poor and the need to seek out public assistance or suffer consistent and severe housing and food insecurity.”

The report acknowledges that raising wages is an energized and politicized topic.

“The important take-away here is that there are significant gaps that need to be addressed between what researchers calculate to be a living wage in Texas, the wages that Texans are actually receiving, and many of the poverty thresholds that determine eligibility for assistance programs,” the report says.

The report also highlights how many families’ incomes have remained flat at the same time they’re having to spend more on food, housing and utility costs.

In 2021, 13.7% of Texas households faced food insecurity, the sixth-highest rate in the nation.

According to a 2021 report from the Center on Budget and Policy Priorities, almost 79% of Supplemental Nutrition Assistance Program participants in Texas were families with children, and more than 27% of them are families with older and disabled adults.

Disclosure: The University of Texas Rio Grande Valley has been a financial supporter of The Texas Tribune, a nonprofit, nonpartisan news organization that is funded in part by donations from members, foundations and corporate sponsors. Financial supporters play no role in the Tribune’s journalism. Find a complete list of them here.