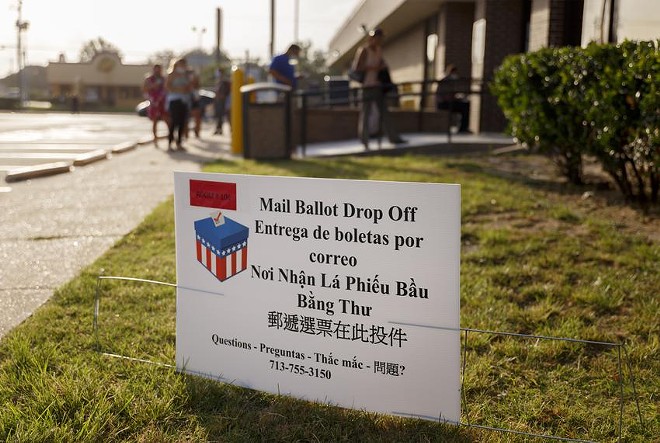 Following a testy three-hour hearing earlier in the day, Federal District Judge Xavier Rodriguez temporarily blocked the state from enforcing the rule against Harris County’s election administrator until the rest of a lawsuit plays out. Although the scope of Rodriguez’s preliminary injunction is limited, the judge dealt the first legal blow to new elections restrictions and voting changes Republican lawmakers enacted last year.

The state is expected to quickly appeal the ruling. The lawsuit was brought by Harris County election administrator Isabel Longoria and Cathy Morgan, a volunteer deputy registrar who is appointed to help register voters in Travis and Williamson counties.

Feb. 18 is the last day for counties to receive applications for mail-in ballots for the March 1 primary.

Rodriguez previewed his order throughout a Friday morning hearing during which he repeatedly pressed the state’s attorneys — with increasing exasperation — to fill in what he cataloged as ambiguities in the new law. The challenged provision makes it a state jail felony for election officials to “solicit the submission” of an application to vote by mail if the voter did not request it.

Rodriguez took particular issue with the lack of a clear definition for what constitutes soliciting when talking to voters, even those 65 and older who automatically qualify to vote by mail under the state’s strict rules.

“It has a chilling effect,” Rodriguez said while questioning a state attorney Friday morning. “They don’t know when they’re going to run afoul of this vague [law].”

His comments followed testimony from Longoria and Morgan, who said they feared the civil and criminal penalties that could come from violating the broad prohibition.

Longoria said her office was now taking a “passive” approach to voter outreach in regard to voting by mail, with staffers “gingerly” weighing their words while answering voters’ questions about their options.

“When it comes to voting by mail, I have to be very careful with my words,” Longoria said from the witness stand. “I stop mid-sentence sometimes at town halls. … I’m tentative to overreach at the moment.”

Morgan testified that she was concerned the law applied even to volunteers like her, given that her role is formally certified by county election offices. She offered examples of voters she no longer felt she could help navigate the vote-by-mail process. That included an 88-year-old voter whom Morgan would typically call at the start of every year to remind her that she has to reapply for mail-in ballots.

State attorneys said that the law did not apply to volunteers like Morgan and argued the government can prohibit interactions between local election officials and voters without running afoul of the First Amendment.

They also repeatedly argued Longoria and Morgan could not prove they were facing an explicit threat of prosecution to justify the preliminary injunction. Under Senate Bill 1, officials who violate the prohibition on soliciting mail-in ballots face a state jail felony, which can be punishable by a minimum of 180 days in jail and fines up to $10,000.

Sean Morales-Doyle, an attorney for the plaintiffs, countered that an explicit threat of prosecution was not necessary because laws are also created to deter specific actions.

“The law is on the books for that purpose,” said Morales-Doyle, an attorney with the Brennan Center for Justice.

And even the state’s witness — Keith Ingram, the Texas secretary of state’s director of elections — indicated the threat of prosecution loomed over election officials. While Ingram was on the stand, Rodriguez presented him with hypothetical interactions between Longoria and voters, asking if she could recommend voting by mail to someone who appeared to qualify.

“I would be very careful about that,” Ingram responded. “You wouldn’t want to recommend” voting by mail as an option “because you’d be worried about prosecution,” he said.

Throughout the hearing, Rodriguez also pressed for the reasoning behind the anti-solicitation provision, interrupting the state’s questioning of Ingram in search of an answer. Ingram said he didn’t know the purpose of the provision.

Eventually, Will Thompson of the Texas attorney general’s office told Rodriguez that the provision was meant to limit “official encouragement” of voting by mail, indicating the state preferred people vote in person even if they qualify to vote by mail.

The anti-solicitation rule is part of the far-reaching voting law, enacted last year by Republican lawmakers who championed it as a measure needed to ensure the integrity of Texas elections — even though there are no widespread issues with elections in the state. SB 1 contains an array of new restrictions on the state’s voting process and narrows local control of elections.

The Harris County lawsuit is just one in a heap of challenges to the election law. The expansive fight against the law includes civil rights groups and community organizations that advocate for voters of color and voters with disabilities who argue the law discriminates against those voters. The U.S. Department of Justice joined those plaintiffs with its own lawsuit last year, targeting new restrictions on mail-in ballots and voter assistance.

Those cases are expected to go to trial later this year.

Disclosure: The Texas secretary of state has been a financial supporter of The Texas Tribune, a nonprofit, nonpartisan news organization that is funded in part by donations from members, foundations and corporate sponsors. Financial supporters play no role in the Tribune’s journalism. Find a complete list of them here.