The state’s parole board did not explain why it was denying the request to pardon Floyd, who was murdered by a Minneapolis police officer, for a minor 2004 drug conviction. Last year, the board recommended Abbott pardon Floyd, then rescinded. 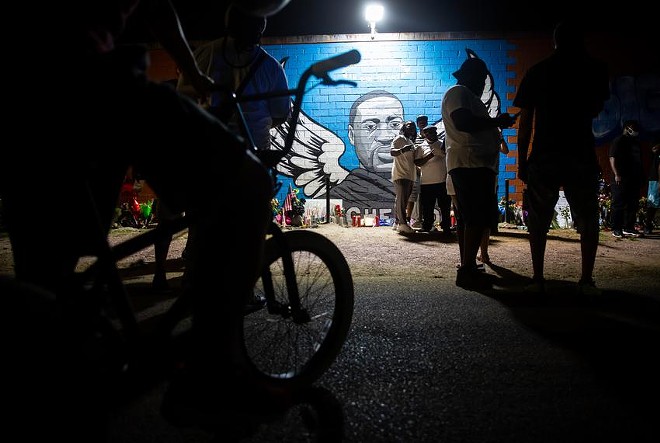 Texas Tribune / Annie Mulligan
People gather at the mural for George Floyd in Houston’s Third Ward in 2020. The Texas parole board last year recommended pardoning Floyd for a minor drug conviction in Houston, then rescinded that recommendation. On Thursday, the board denied a request for a pardon.

The Texas Board of Pardons and Paroles has unanimously denied a posthumous pardon of George Floyd for a minor 2004 drug conviction in Houston. The decision comes 11 months after the agency initially recommended a pardon before reversing course and rescinding that recommendation, citing a procedural error.

In a letter Thursday, the board did not explain its reasoning for rejecting the requested pardon. The letter does not include Floyd’s name, but his attorney, Allison Mathis, confirmed to the Texas Tribune that his application was the only pardon she applied for. The letter said Mathis can reapply for the posthumous pardon in two years.

“This was a chance for Texas to do a small, good thing: to take an apolitical stance that no matter who a person is, their rights need to be respected and an accurate record of their life is important. Last year the board unanimously recommended that Mr. Floyd be granted a pardon, acknowledging that what happened to him was wrong. I have given no other facts or evidence for the board to consider and it is unclear to me what happened to completely reverse their decision,” Mathis said in a statement to the Tribune.

Floyd’s 2020 murder at the hands of a white police officer in Minneapolis set off a wave of protests against police violence that disproportionally impacts people of color.

Floyd was arrested by embattled former Houston police officer Gerald Goines in 2004 after he was found to have less than half a gram of crack cocaine. Goines said at the time that Floyd had given the drugs to an unnamed person. Floyd ultimately pleaded guilty and received a 10-month sentence in state jail. But Goines has since been accused of repeatedly lying or making up confidential informants to bolster his word against defendants, which was revealed after a botched, deadly raid in 2019 led to murder charges against the officer.

After the board suggested Gov. Greg Abbott pardon Floyd last October, the governor largely remained silent on whether he would take the step to issue the second posthumous pardon in Texas history. Roughly two months after making the recommendation, the board changed its original recommendation, explaining the original decision lacked compliance with board rules.

In effect, the board enabled Abbott to avoid the decision to pardon Floyd, which likely would have had political fallout for the Republican governor who touted supporting law enforcement as he backed GOP lawmakers who were up for election in 2020. Abbott is currently seeking a third term and faces Democrat Beto O’Rourke in November.

Abbott’s office did not return a request for comment Thursday evening.