Earlier this year, Hotze was indicted on felony charges over his alleged involvement in a plot to uncover 'fraudulent ballots.' 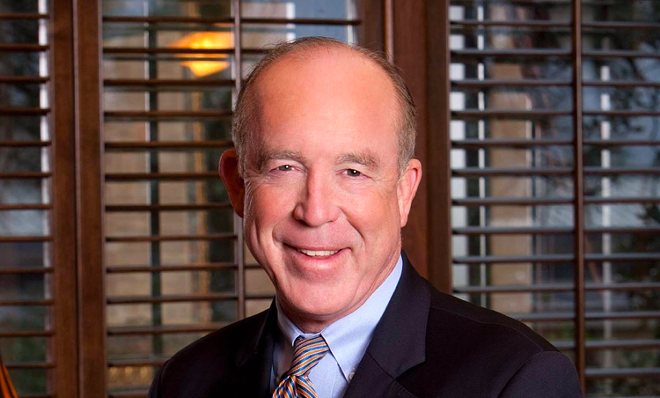 Facebook / Steven Hotze
Steven Hotze, a physician and talk radio host, has donated to the campaigns of U.S. Sens. John Cornyn and Ted Cruz.
Texas-based GOP donor and conservative activist Steven Hotze was captured on video claiming that people who have received the COVID-19 vaccine can be mind-controlled via 5G cell phone towers.

In the clip, posted Thursday on Twitter by the Washington, D.C-based watchdog group Right Wing Watch, Hotze explains that the vaccinated “become connected to the internet of things” after receiving the injection and that satanic forces are then able to control their minds.


Steven Hotze, a Texas-based religious-right activist and doctor, says that those who have received COVID-19 vaccines "become connected to the internet of things and you can be mind-controlled by artificial intelligence through maybe 5G." pic.twitter.com/BjpBqbPqja

“They’re putting 5G everywhere. It’s like the tower of Babel,” Hotze says in the video. “And how did God deal with the Tower of Babel? How much longer do you think he’s going to tolerate the Satanic plan? This is transhumanism.”

According to the Dallas Observer, the video appears to have been filmed at the Omni Barton Creek & Spa in Austin last month during the Liberty Pastors Group Conference, a right-wing group of religious leaders who advocate for a theocratic form of government.

Hotze, a physician and talk radio host, has been a longtime advocate on conservative issues in the Lone Star State and has donated to the campaigns of U.S. Sen. Ted Cruz, U.S. Sen. John Cornyn and Lt. Gov. Dan Patrick, among other Republicans.

The video clip isn't the first time Hotze has dabbled in the world of absurd conspiracy theories, however.

In April, Hotze was indicted on two felony charges in Harris County related to in incident in which a private investigator allegedly hired by the activist held an air conditioning repairman at gunpoint to uncover stolen ballots from the 2020 election, according to the Texas Tribune.

Despite telecom providers' efforts to show the technology isn't dangerous, some in far-right circles believe the towers microwave the organs of unsuspecting citizens and were the true cause of the coronavirus crisis.

Earlier this year, a San Antonio man with “anti-government views” and a woman accomplice were arrested on charges that they set a local 5G tower ablaze in 2020.