Martinez Fischer replaces Rep. Chris Turner of Grand Prairie, who has led the caucus since 2017 and did not seek reelection. 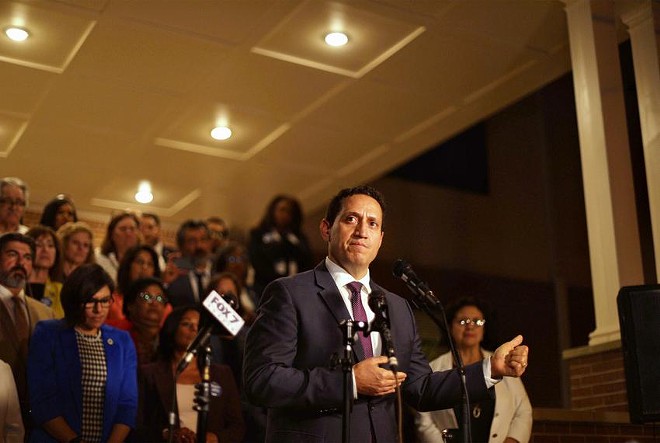 Texas Tribune / Miguel Gutierrez Jr.
State Rep. Trey Martinez Fischer, D-San Antonio, speaks at a press conference at Mt. Zion Baptist Church near the state Capitol in Austin on May 30, 2021, after Democrats broke quorum in opposition to Senate Bill 7, a sweeping GOP voting bill.
State Rep. Trey Martinez Fischer is the newest chair of the Texas House Democratic Caucus and will take the lead on legislative strategy, messaging and fundraising for at least the next two years.

He secured the position Wednesday during a closed-door caucus meeting in Austin. He defeated Rep. Gina Hinojosa of Austin, after a third candidate, Rep. John Bucy of Austin, withdrew before voting began. Bucy endorsed Hinojosa.

Martinez Fischer replaces Rep. Chris Turner of Grand Prairie, who has led the caucus since 2017 and did not seek reelection.

The election of Martinez Fischer could signal a more confrontational posture for the caucus. He is known as a fighter on the House floor who is well-versed in the rules, one of the few tools the minority has to make an impact. He unsuccessfully challenged Turner for the chairmanship during the 2021 session.

Martinez Fischer represents the San Antonio-based House District 116. He held the seat from 2001-17 before reclaiming it in 2018 after an unsuccessful campaign for state Senate.

Democrats are again in the minority as they enter the next legislative session, which begins Jan. 10. They control 64 seats, while Republicans hold 86 — a similar balance to the one last session.

The House Democratic caucus captured the national spotlight last year when most of its members broke quorum — absconding to Washington, D.C. — in protest of Republicans’ priority elections bill, which they described as a voter suppression measure that disproportionately affected people of color. They ultimately splintered on how to keep up their protest, and enough Democrats returned to the floor to allow passage of the bill. Intraparty tensions have lingered from that episode as the next session approaches.