Police told reporters the man may have been attempting to shoot a video. 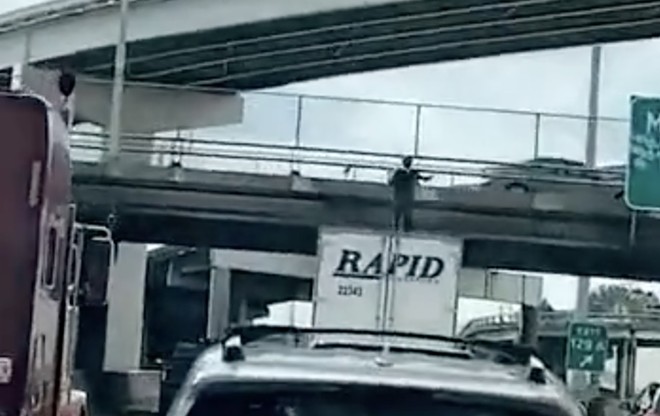 Screenshot / Grizzy Hood News
The man's sister told the that he struggled with mental health issues including bipolar disorder and schizophrenia.
An investigation is underway after a Texas man fell to his death while dancing on top of a moving 18-wheeler, Houston Public Media reports.

Marquist Hutch, 25, reportedly climbed on top of a tractor-trailer truck traveling down Intestate 69 in Houston on Nov. 11 and began dancing. Police said the man was “possibly recording himself” while performing, according to HPM.

However, Hutch’s dance came to an end when the 18-wheeler drove under the Taum Street Bridge south of downtown, knocking him off the vehicle, the radio station reports.

Hutch was rushed to the Memorial Hermann Hospital-Texas Medical Center, where he died of multiple blunt impacts, the report states.

According to the HPM, Hutch and the truck driver didn't know each other, and the driver told authorities he wasn’t even sure when Hutch got on top of the truck.

Hutch’s sister told the Houston Chronicle her brother struggled with mental health issues including bipolar disorder and schizophrenia. She said she was unsure what could have prompted him to jump on top of the vehicle.

Police wouldn't confirm to the Chronicle whether Hutch was filming himself but said that investigators should know more in coming weeks.