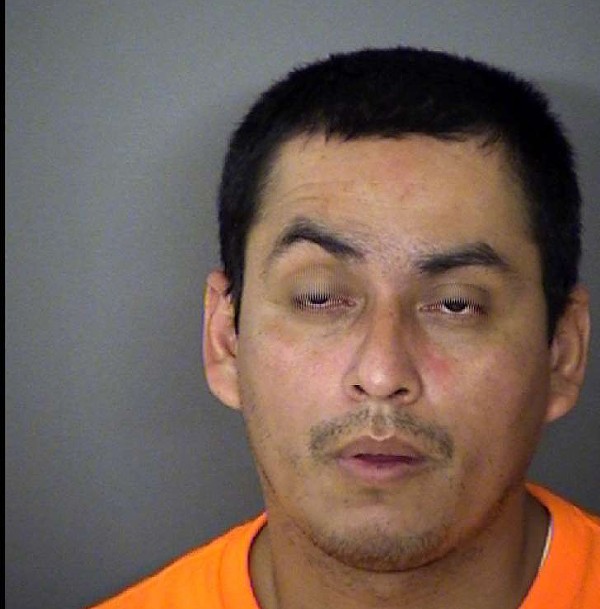 Bexar County Sheriff's Office
A Texas Mexican Mafia member plead guilty Thursday morning to his role in the murder of a Balcones Heights police officer who also claimed membership in the prison gang.

Idrogo, the gang's North Side sergeant, killed Padilla in August 2013 because the man failed to turn over drug money to the gang. While Idrogo didn't pull the trigger to kill Pesina, who was under investigation for selling drugs, he did lure the man into a trap. Pesina angered the Texas Mexican Mafia because he was claiming membership in the gang, selling drugs to its members and was a police officer.

In May 2014, Pesina drove gang prospect Alfredo Cardona, 38, and Jesse Santibanez, 27, a gang member in bad standing, to Pesina's tattoo shop, Notorious Ink Tattoo and Piercing Studio to collect a "dime," or drug tax. When Pesina handed the cash to Idrogo, Santibanez and Cardona shot and killed him. The murder was caught on surveillance video being used by the FBI to investigate Pesina, the San Antonio Express-News reports.

High-ranking Texas Mexican Mafia member Ruben "Menace" Reyes ordered the hit on Pesina. Reyes plead guilty in late July to killing four people and ordering a hit on a fifth, Pesina. According to the E-N, Reyes admitted to killing an addition 11 people, but prosecutors only charged him with the murders that they knew they could prove. Reyes also faces life in prison.

Both Cardona and Santibanez remain in federal custody. A trial is scheduled for October 17. Idrogo is expected to be sentenced in November and Reyes should be sentenced in September.