The wildlife sanctuary’s conservation work has been overshadowed by political drama over its location on the border. 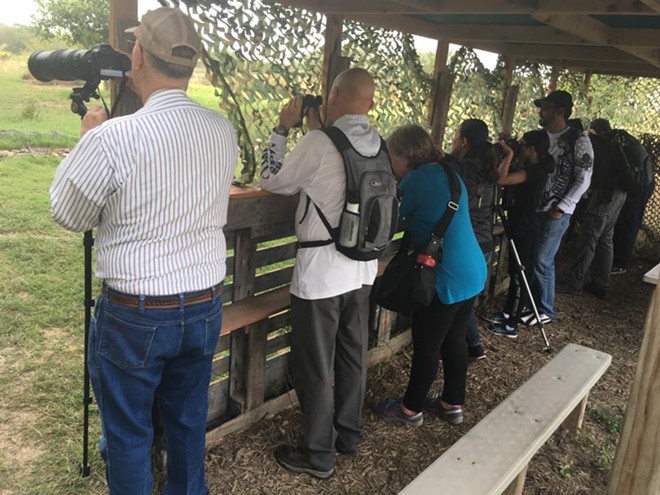 Via the National Butterfly Center's Facebook page
Bird-watchers engage in their hobby at the National Butterfly Center, which has been threatened by right-wing extremists.
This article was originally published by the Texas Observer, a nonprofit investigative news outlet. Sign up for their weekly newsletter, or follow them on Facebook and Twitter.”

More than 100 butterfly enthusiasts descended on the border city of Mission over Halloween weekend to celebrate the annual Texas Butterfly Festival. The event marked a comeback for its host, the National Butterfly Center, which has been threatened and harassed by right-wing extremists who believe (falsely) that the wildlife sanctuary is a human trafficking hotspot. The center closed from January to April over safety concerns.

“We reopened the National Butterfly Center on Earth Day, and this year it was honestly a big celebration,” recalled Marianna Treviño-Wright, director of the center.

Although festival enrollment was down slightly due to the pandemic and political controversy, Treviño-Wright was excited to share her love of butterflies with dozens of new initiates. Accompanied by 20 or so guides, they spent four days tracking the annual migration of monarchs and other species throughout South Texas.

Threats are fading as the conspiracy-minded look elsewhere, but for months they overshadowed the butterfly center’s conservation work at a time when it’s more important than ever. Many scientists believe the Earth is in the midst of a sixth mass extinction. A recent report from the World Wildlife Fund revealed that across species, populations have declined by almost 70 percent since 1970. This loss of biodiversity includes butterflies.

The festival’s keynote address came from Matthew Forister, an ecologist at the University of Nevada, Reno who studies how insects are surviving on a warming planet with less and less wildlife habitat. Forister’s research focuses on the Western states, but his findings are relevant to Texas, which shares many butterfly species with its neighbors to the west.

“We’re trying to understand all the stressors of the modern age affecting insects,” he said, pointing to climate change, pesticides, and habitat loss to humans as the biggest threats.

Forister and his collaborators study long-term data across 11 states and have seen a slow but steady decline in the populations of 450 butterfly species. Across species, they found these populations had an average of 1.6 percent fewer individual butterflies each year since 1972. While the decline in any given year may be small, with fewer and fewer butterflies around to reproduce each generation, the loss “really adds up over time,” he explained.

The migratory monarch (Danaus plexippus plexippus) is the most famous of these imperiled butterflies. While many monarchs still journey each fall through Texas, their numbers on the West Coast have dropped dramatically. This July, the species was listed as endangered by the International Union for the Conservation of Nature, which maintains a global red list of threatened species.

At the same time, Forister said in his region of study there are at least 15-20 other butterfly species in more severe decline than the monarch. “I would be surprised if that wasn’t true in Texas as well,” he said.

Against this worrying backdrop, the National Butterfly Center in Mission offers a 100-acre refuge for more than 200 butterfly species, lush with milkweed, sagebrush, and other plants that provide food and shelter for the insects. The Rio Grande Valley is an especially important habitat for North America’s migratory butterfly species.

“Our little ‘Hundred Acre Wood’ began as a commercial onion field that we have revegetated for butterflies over the last 20 years,” Treviño-Wright said. Now, butterflies flock there. “They find us and they come here on purpose. If you plant it, they will come,” she explained.

In turn, the butterflies help the region’s surviving native vegetation.

“Most people do not appreciate the fact that all of our native grasses, wildflowers, shrubs, and trees are pollinated by butterflies,” Treviño-Wright said. “If the butterflies disappear, so does all of the green stuff.”

The center’s popularity with these creatures is not only because of the work Treviño-Wright and her colleagues have done to restore hundreds of native plant species. It’s also because butterflies have lost—and continue to lose—so much habitat elsewhere in Texas to construction and agriculture. As a result, wildlife is forced to concentrate in the small hospitable spaces that remain.

And recently, political strife over human migration has threatened to turn the National Butterfly Center into collateral damage of our border disputes. Treviño-Wright fought tooth and nail through the Trump administration against plans to seize land from the center to build the former president’s beloved border wall. Although a federal judge dismissed a lawsuit over the construction of the wall, Congress protected the center after public outcry. All this, in turn, was what attracted the conspiracy theorists.

While the situation may have calmed since then, ongoing militarization of the border continues to interfere with the center’s work, according to Treviño-Wright. She said border patrol agents, vehicles, and equipment are a regular sight on and around the property. In one highly publicized incident this past summer, Treviño-Wright discovered a loaded M4 rifle in a Texas National Guard vehicle left running and unlocked with no one inside. According to the military news publication Task & Purpose, she informed the Border Patrol, which came and confiscated the rifle about 45 minutes later.

Incidents like this hardly make Treviño-Wright feel safer. This is her 11th year as director of the National Butterfly Center, and she’d never have guessed, when she started, that the center would end up “at the crossroads of contemporary fascism in America. … But that’s where we find ourselves.”

In a time of severe environmental degradation and bitter political divides, the Texas Butterfly Festival’s return offers hope for insects and humans alike. For Matthew Forister, the event gave a welcome perspective on just how many people cherish butterflies and other wildlife.

“As a researcher myself, we’re very focused on our study sites and working with our data. It’s really always heartening to see just a crowd of average people that know and care about their butterflies a lot,” he said.

There are things average people can do to help. Forister pointed to using less pesticides, both in individual yards and in the plant supply chain, as a relatively straightforward course of action. Tackling more complex problems—like climate change and the sprawl of human settlement, agriculture, and industry—may be harder, but well worth the effort.

Many of the butterflies Forister saw at the National Butterfly Center are common species in Texas, but they were new to him as a Nevadan. “Everything I saw was pretty special to me,” he said. Whether people have seen a particular butterfly species a million times or whether they don’t know the first thing about it, all living things have inherent value, he pointed out: “All wild organisms, in my perspective, deserve attention and conservation and protection.”