Despite Texas' spate of recent mass shootings, lawmakers 'continue to sit on their hands and refuse to enact foundational gun safety laws,' according to the report. 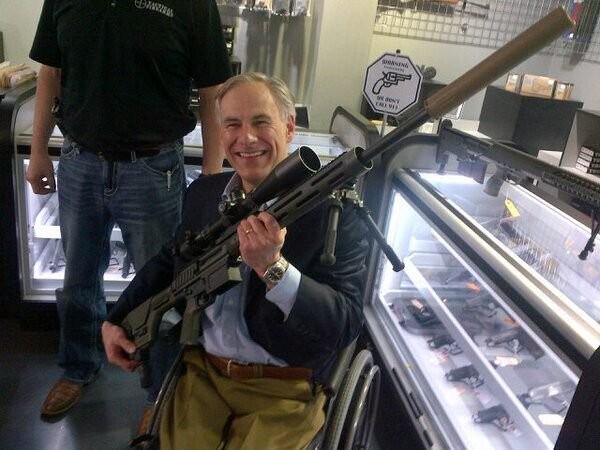 Twitter / @GregAbbott_TX
Gov. Get Abbott poses with a weapon during a gun-store photo op.
A study from earlier this year analyzing the firearms laws of all 50 U.S. states placed Texas in the bottom third based on the weakness of its gun-safety statutes.

The analysis, conducted by reform group Everytown for Gun Safety, put the Lone Star State at No. 34 in comparison to regulations adopted by other states. With a rate of 12.7 deaths annually per 100,000 people, Texas also had the 28th-highest rate of gun deaths in the U.S., according to the report.

While the study originates from January, it's gained new resonance as the state struggles to comprehend last week's shooting rampage at Uvalde's Robb Elementary School, in which an 18-year-old gunman killed 19 children and two teachers.

Despite Texas' history of mass shootings, which also include the 2019 El Paso and 2017 Sutherland Springs massacres, lawmakers "continue to sit on their hands and refuse to enact foundational gun safety laws," according to Everytown's study. "To the contrary, the laws passed in recent years have torn down existing protections."

Last year, Gov. Greg Abbott signed seven bills passed by the Republican-controlled Texas Legislature that lift firearms restrictions. The most controversial of those laws cleared Texans to carry handguns without a license or training.

Everytown's study identifies five types of regulations as "foundational": background checks, required concealed carry permits, the lack of a stand-your-ground law, secure-storage requirements and statutes that cut off gun access to people who are "extreme risks." Of those, Texas only has a secure-storage law.

Beyond the lack of fundamental protections, which many advocates categorize as "common sense" gun laws, the report notes that Texas now forces public colleges and universities to allow guns on campus and lets K-12 school personnel carry firearms.