Texas set to adopt open-carry of guns, even as study shows violent crime goes up after such laws 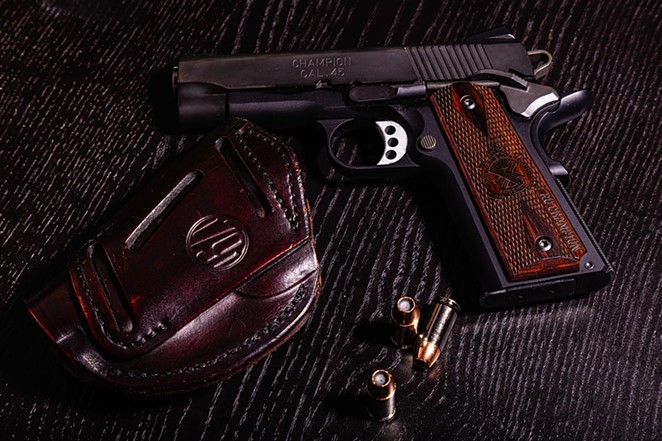 UnSplash / Jeremy Alford
A bill headed to Gov. Greg Abbott's desk would allow Texans to carry handguns in public without obtaining a license.
A bill letting Texans carry handguns without training or a license is now poised to become law, even though a study of data from 33 states that have adopted more lax gun laws suggests violent crime will increase in its wake.

A 2019 report from the Journal of Empirical Legal Studies shows that adoption of right-to-carry handgun laws trigger a 13-15% increase in violent crime in the 10 years after a typical state adopts them. The study analyzed years of Bureau of Justice Statistics data to come up with its results.

In 23 of the states that throttled back restrictions, the increases in violent crime were substantial, according to the study. Pennsylvania's rate went up 24%, for example, while Texas experienced a 17% spike in the 10 years following its adoption of concealed carry, the predecessor to the even more lax bill now headed to Gov. Greg Abbott's desk.


The study findings fly in the face of claims of open-carry advocates, who argue that the Second Amendment is absolute and that a heavily armed citizenry will keep criminals in check.

“The important takeaway is that more guns seems to lead to more crime,” study author John Donohue of Stanford Law School told BuzzFeed News after the publication of his research. “So, it is probably wise to think in terms of appropriate controls, and it would be very unwise to push the 2nd Amendment too far."

Texas' current proposal, backed by GOP lawmakers, would drop the requirement that adult residents — except those prohibited by state or federal law from owning a handgun — obtain a license and training before packing in public. No background check would be required.

Abbott, a Republican, has said he'll sign the legislation.

While 20 other states have similar open-carry laws, gun control advocates have raised concerns that a surge in publicly carried firearms could lead to more mass shootings such as the bloody 2019 massacre at an El Paso Walmart.

Law enforcement officials have also raised the alarm, pointing out that research beyond Donohue's suggests that violent crime goes up when more people are carrying. They worry a proliferation of firearms could create chaos at crime scenes as officers try to figure out which armed people are criminals and which are well-intentioned citizens.


Kevin Lawrence, executive director of the Texas Municipal Police Association, this week told the Washington Post that crime rates increased after the passage of open-carry laws in four of five states that he surveyed.

“It’s going to make the jobs of the officers on the street more difficult,” he said.

A majority of Texas voters — 59%, to be exact — also oppose permitless carry, according to a University of Texas/Texas Tribune Poll from last month.