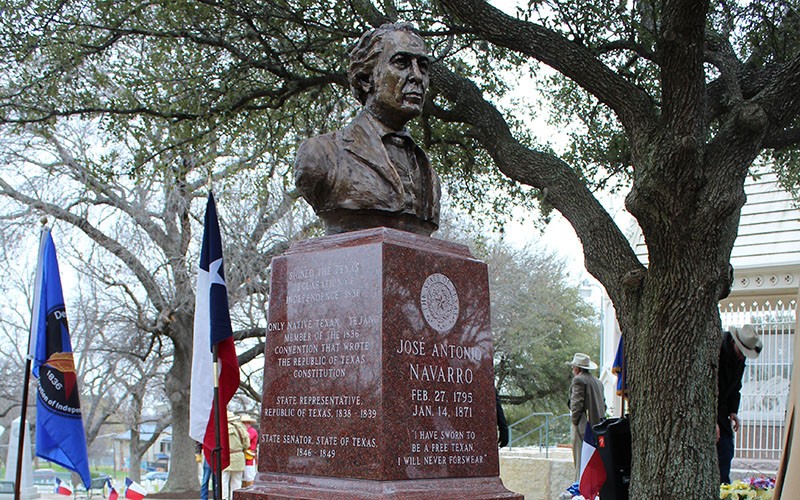 Every good Texas child learns about Davy Crockett and Jim Bowie dying heroically at the Alamo and, of course, about the "Father of Texas," Stephen F. Austin.

But few know that only two native Texans signed the Lone Star State's Declaration of Independence, and they weren't Anglos. The rest of the signers were immigrants.

Yet both of these Texans are often left out of the Lone Star State's history books, a sad point Sylvia Navarro Tillotson has set out to remedy.

Her great-great-great grandfather is José Antonio Navarro, a San Antonio native who signed the Texas Declaration of Independence and helped write the Texas Constitution, though he spoke no English.

On the anniversary of Navarro's 220th birthday, February 27, a cenotaph — or empty tomb — was erected in his honor at the place where legendary Texans rest: the Texas State Cemetery.

"This recognition by the state honoring Navarro will be a permanent marker for thousands of visitors and school children," Tillotson said. "It will be there for generations as an instrument of teaching Texas history."

Navarro is a true Texas patriot who was even sentenced to death — though he escaped — for his loyalty to the then-fledgling Republic of Texas. Navarro's uncle, José Francisco Ruiz, also born in Bexar County, is the other Lone Star State native who signed the state Declaration of Independence.

More than 200 years later, Tillotson and the volunteer group Friends of Casa Navarro dedicate their time to preserving the man's memory and legacy — no easy task.

"The name Navarro is well-known. There's a street named after him, schools are named after him and people know the name," Tillotson said. "But they really don't know why the name is famous or anything about Navarro."

That's because history books, which were written by Anglos, sidelined Navarro's accomplishments, barely even mentioning them. While some academics avoid saying it was outright racism, Tejano advocate Renato Ramirez isn't so shy to share his views.

Ramirez, a Laredo-based bank executive who spearheaded the effort to erect the gargantuan Tejano Monument at the Capitol in 2012, said minority contributions to Texas history are suppressed.

"I'm just saying we got to tell the truth about history. There were gross atrocities committed against Mexican Americans in Texas — many under the color of the Rangers," he said.

Rather than including tales of violent racism and land grabs, most historians concentrated on easy-to-paint-as-hero figures, all Anglos, such as Crockett, Bowie and others who took part in the Battle of the Alamo.

"The way it's written is by individuals who didn't care to acknowledge Navarro's contributions to the state and to the Republic of Texas," said Emiliano 'Nano' Calderon, an educator at Casa Navarro Historic Site in downtown San Antonio.

It was a sign of the times, since the omissions weren't a one-time thing.

"You just gradually see that things are taken away from [Tejanos] throughout history, starting from the influx of the Anglo immigrants into Texas," explained Erika Arredondo-Haskins, executive director of the Hispanic Heritage Center of Texas. "They came in herds and outnumbered the Tejanos. Slowly our roles were taken away from us."

While the winners — or at least the most powerful — steered the historical record toward the Anglo perspective, the way Tejanos are included in history courses and recognized by contemporary state leaders is starting to change.

That topic was taken up in early March at the Texas State Historical Association meeting in Corpus Christi, which Arredondo-Haskins attended.

"There's a lack of this information in our history books and as you know, that's all politics," she said. "So we have to continuously find other ways to tell the true stories."

Out of the meeting came a push to get the word out about a new textbook, Texas Contemporary World Studies, which is still in the approval stage.

"The State Board of Education did approve certain pieces, but it's not as much as we would like included," Arredondo-Haskins said. "It is a change and it is a step forward."

Several school districts across the state are using the book as part of a pilot program, she noted.

And then there's the Tejano History Curriculum Project, which is being used in a few Austin-area elementary schools. The project provides supplementary material that tells the stories of Tejanos.

"They're seeking funding to have the actual curriculum distributed amongst all the school districts that will take it," Arredondo-Haskins said.

At Casa Navarro, an adobe-walled house in a former Tejano neighborhood called Laredito, Calderon does his part to fill the void in Texas' history books. He spends his days talking to tourists, curious locals who never new about Casa Navarro and to school-aged children on field trips.

"It's kind of like his [Navarro's] dream home. He'd already been a well-established merchant landlord, so he had the capital to build his own home," Calderon said. "We have exhibits and interactive forms of education for kids and families to experience."

For the descendants of Tejanos, it's not just about rectifying history — it's often a deeply personal struggle.

Through her work at the heritage center, Arrendondo-Haskins discovered she can personally boast of some proud Tejano connections.

"I found out that my fourth generational grandfather was [San Antonio] mayor in 1816," she said. "He was appointed by Navarro and he had all these prominent roles. And all my mom knew was that grandpa said there was a mayor in the family."

His name was Domingo Bustillos.

Her discovery, however, may not be all that unusual.

"There are so many more Antonio Navarros out there that we don't even know about and their stories haven't been told," she said.

• The popular hotel chain La Quinta has a name with roots in a dark past. After the Battle of Medina in 1813, Spanish General Joaquín de Arredondo gathered up the wives of men who fought to wrest control of Texas from Spain and he put them in a jail, where they were subjected to rape and torture. That jail was called La Quinta. The surviving soldiers and anyone else deemed a traitor — about 300 people — were marched to Main Plaza after the battle and were beheaded or hanged right in front on the San Fernando Cathedral.

• Spain and France wanted the colonies to defeat England during America's Revolutionary War. During that war, a man named Bernardo de Gálvez, the governor of Louisiana, was tasked with fighting the British and also feeding the troops. There's one single reason Gálvez was the right man for the job. He knew Tejano communities from their violent encounters with Native Americans. Turns out the man knew a lot about longhorns, too. He convinced the then-governor of Texas to send cattle so he could transport them east, not an easy task in the face of hostile Native American and British forces. According to the Briscoe Center for American History, 2,000 cattle were sent in 1770 and another 9,000 were sacrificed for the war effort over three or four years.

• In 2006, Toyota Motor Manufacturing Company Texas arrived on a swath of land in Bexar County. But long before, in 1794, Juan Ignacio de Casanova settled there after receiving a Spanish land grant near Leon Creek and Medina River, where he founded El Rancho de la Purisima Concepción, eventually holding more than 24,000 acres, according to Toyota. Unfortunately for Casanova, he supported the Mexican Government during the Texas Revolution and had to flee Bexar County. Upon return, he found squatters on his ranch. However, Casanova eventually reclaimed a portion of the land, which is where Toyota built its manufacturing plant.