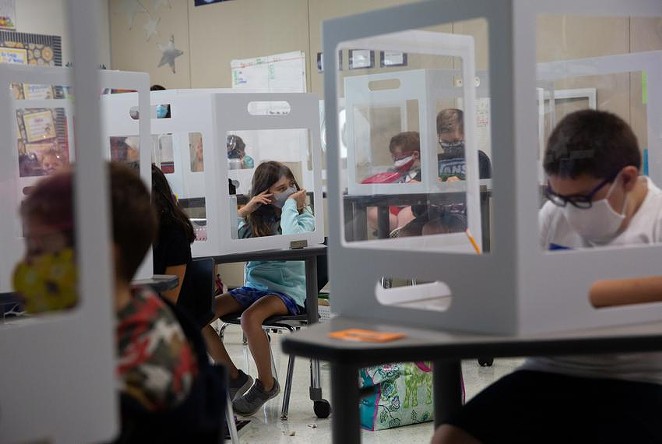 For cities, counties and school districts that have defied Gov. Greg Abbott by issuing mask mandates in public schools, the Thursday ruling is a victory on a technicality: The high court left in place a Travis County judge’s temporary restraining orders against Abbott’s ban on mask mandates. The court’s order cited a provision that typically requires matters to go to an appellate court before it reaches the state's highest civil court.

The local mask mandates in public schools seek to protect school children too young to get vaccinated from COVID-19 as the highly contagious delta variant of COVID-19 continues to spread throughout the state. Abbott, who is vaccinated, tested positive for the coronavirus Tuesday but was not experiencing any symptoms.

The Supreme Court order is another legal blow for Abbott and Paxton. Also on Thursday, the 4th Court of Appeals ruled that a separate temporary order allowing mask mandates in San Antonio and Bexar County could stand, San Antonio Report reported.

For the past two weeks, Abbott and Paxton have tried to beat back cities, counties and school districts that have either challenged Abbott’s order or ignored it altogether. Some 58 school districts and eight counties have instituted mask mandates of some kind, according to a list compiled by Paxton, whose office argued that the local mandates were causing “mass confusion” in Texas.

The Texas Education Agency on Thursday stated that Abbott’s mask order is not being enforced due to ongoing litigation.

As the state’s high court continues to allow other legal challenges to play out, Abbott could also soon be fighting his war against mask mandates on multiple fronts.

Abbott’s ban has sparked a federal lawsuit from a disability rights group representing 14 children alleging that Abbott’s order violates federal protections for students with disabilities because it prevents them from safely returning to in-person classes. And on Wednesday, President Joe Biden directed the U.S. Department of Education to use its civil rights enforcement authority to go after states that prevent mask mandates in public schools.

Amid the legal chaos, many school districts have abandoned plans to require masks. But others have moved forward with theirs. In a novel approach, Paris Independent School District made mask-wearing a part of the school dress code for students and employees.

Join us Sept. 20-25 at the 2021 Texas Tribune Festival. Tickets are on sale now for this multi-day celebration of big, bold ideas about politics, public policy and the day’s news, curated by The Texas Tribune’s award-winning journalists. Learn more.