Texas' top cop told his captains ‘no one’ would be fired over Uvalde police response, notes show

DPS Director Steven McCraw also said agency leaders for the Uvalde region 'did what they are supposed to do' and 'stepped up to meet the moment,' meeting notes show. 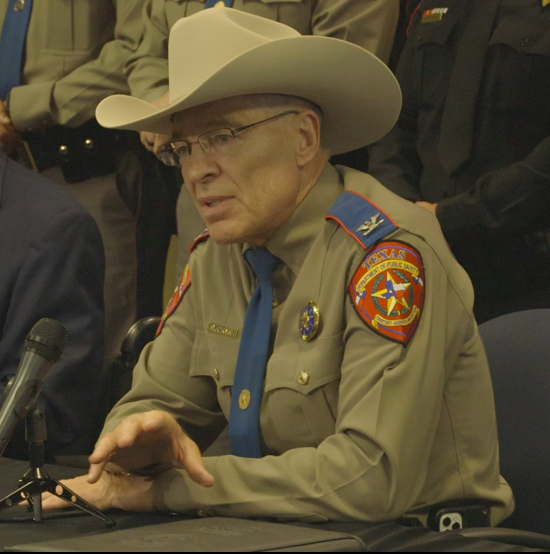 Facebook / Texas Department of Public Safety
DPS Director Steven McCraw speaks at a press conference.
The head of the Texas Department of Public Safety told a gathering of agency captains that “no one is losing their jobs [sic]” over the botched law-enforcement response to the Uvalde school shooting, TV station KXAN reports, citing timestamped notes.

DPS Director Steven McCraw also told attendees that agency leaders overseeing the Uvalde region "did what they are supposed to do" and "stepped up to meet the moment," notes from meetings held on Aug. 15 and 16 show, according to KXAN.

DPS and other law-enforcement agencies that responded to may May 24 shooting that killed 19 elementary school students and two teachers have come under public scrutiny for waiting more than an hour to breach a classroom and kill the gunman. Ninety-one DPS troopers were among the nearly 400 armed officers who descended on the campus.

Further, McCraw has provided contradictory claims about how events unfolded that day, and his agency is among those stonewalling media attempts to gain access to public records about the massacre.

In comments to CNN on Thursday, McCraw confirmed much of the content in the notes referenced by KXAN. However, he said he was misquoted about the likelihood of agency officials losing their jobs, adding that his comment was only meant to reference DPS Regional Director Victor Escalon.

McCraw further told CNN "no one gets a pass," an apparent reference to a pledge from early August that his agency would conduct an internal review of actions taken by all 91 DPS troopers present at Robb Elementary School.

This week, DPS referred information on five of those officers to Texas' inspector general to determine whether discipline or a criminal referral are warranted. Two of the troopers were suspended with pay pending the outcome of the review.

State Sen. Roland Gutierrez, a San Antonio Democrat whose district includes Uvalde, said McCraw should lose his job over his alleged assurance that no one would be fired over the failed response at Robb Elementary. The senator added that McCraw's comments call into question the integrity of DPS's internal investigation.

“Just a few days ago, when the inspector general investigation of DPS Troopers was made public, families had a glimmer of hope that there would at least be some accountability, if delayed," Gutierrez said in a statement emailed to the Current. "Now, we find out that it may all be a sham. Planned and executed by Governor Greg Abbott’s DPS Director Steve McCraw. It is time for Director McCraw to resign, and for Governor Abbott to call for that resignation."

Gutierrez, who sued DPS to force it to share documents about the Robb Elementary response, has accused McCraw of misleading the public to avoid blame. He and Uvalde parents have also voiced anger about Gov. Greg Abbott's continued refusal to call a special session of the Texas Legislature to address school safety and gun reform in the wake of the massacre.

“The fact is the State of Texas failed the community of Uvalde. Not just one individual or just a few DPS troopers — the entire Department of Public Safety and its Director have failed. Then they covered it up," Gutierrez said. "Governor Abbott failed, and even more damning than his failures that day and after, is his blind commitment to reckless gun policies that put all of our lives in peril every single day."