An Abbott spokesperson previously told the Current that the governor's office was 'not involved' in DeSantis' political stunt. 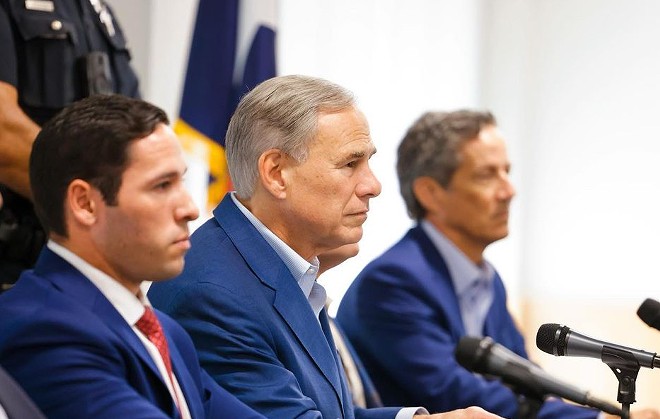 The texts obtained by a watchdog group appear to contradict earlier claims from Abbott's press secretary, who previously told the Current that the Republican governor was "not involved" in the flights from San Antonio.

"Luis, I've asked a guy on my team, Larry Keefe, to be the [point of contact] here, and he can loop in others as needed," Uthmeier says in a message to Saenz with Keefe included in the text message chain. "He serves as one of the boss's senior advisors for public safety. He's a former Atty under Trump, trustworthy and effective."

Keefe served as U.S. attorney general for the Northern District of Florida between 2019-2021 before being appointed by DeSantis, a Republican, as public safety czar, according to the Express-News.

The documents don't include Saenz's response or the date on which the messages were sent. However, the Florida Center for Government Accountability told the Express-News the texts were sent Sept. 1-13, before the migrant flights to Martha's Vineyard, which occurred Sept. 14.

"Our office has had conversations with Governor DeSantis and his team about supporting our busing strategy to provide much-needed relief to our overwhelmed and overrun border communities," Eze previously said in the email. "Though we were not involved in these initial planes to Martha's Vineyard, we appreciate the support in responding to this national crisis and helping Texans."

The messages unearthed by the Florida Center come to light days after other documents obtained by media outlets via public records requests exposed DeSantis' plans for more flights and the intricate planning that went into the operation.