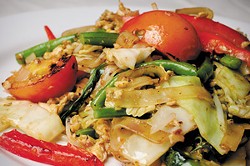 
“Here or to go?” was the brusque greeting at Thai Corner my first time out. “Here” was the answer — and here’s the result.

The $7.35 lunch menu, available daily, seems a bargain at first glance. It comes with soup, appetizer, and tea, along with a choice of several entrées. I was challenged again when I ordered my green curry with Japanese somen noodles at spiciness level five out of six. “You sure?” responded the waitress. No — but I stuck to my guns.

The soup is automatic. On this occasion it was noodle with a few bits of chicken, and it was bland, bland, bland. I added lemon from the iced tea, all the while thinking the spice-level bit must be a red herring. With the arrival of the “fresh” spring roll, I was even more convinced the spice challenge was meaningless — not that I expected any here. Sporting carrot, avocado, and cream cheese in a wonton-like wrapper, these were easily the worst rolls I’ve ever had — and they weren’t improved by the sweet plum sauce. But then the bowl of curry appeared.

Considering the saffron hue, it would be easy to imagine this the yellow curry instead of green. A blob of pale noodles sat alongside the bowl to be added at will. I was not amused. Until I took the first bite. Spice level five was indeed a tad challenging, but doable. (If you can down an order at level six, it’s said to be free.) The curry was lush and creamy with generous portions of chicken, snappy green beans, bell peppers, mushrooms, and bamboo shoots. I sliced off some somen and added it to the bowl. Very fine.

So I returned, unchallenged this time; maybe my number-five fame had preceded me. The soup was full of chunky squash, cabbage, and ground chicken and was very good. The leathery potstickers sucked, sorry to say. But my drunken noodles, ordered at level four (I had nothing more to prove), was plenty hot and mighty good. Consisting of broad rice noodles with minced chicken, lots of crisp vegetables, and a fragrant supply of basil, I would order this again. All of which suggested that it might be worth investigating the much more extensive evening menu at the Medical Center Thai Corner (there’s also one on Bandera). “Thai it, you’ll like it” is their motto. At least it isn’t “Thai one on.” — Ron Bechtol