'The Daily Show' in Texas, Day Two: Joaquin Castro and a Song about Texas 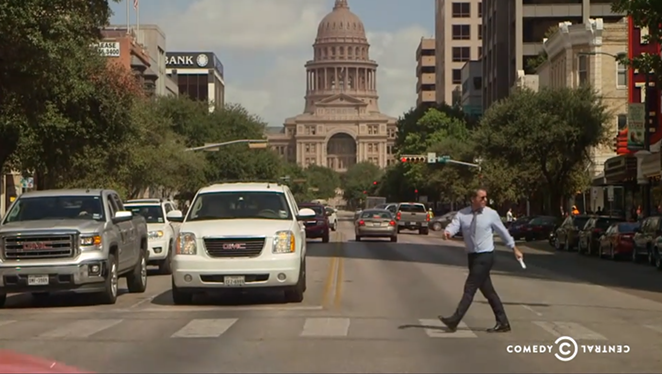 Courtesy of Comedy Central
The second Texas episode of "The Daily Show: Democalypse 2014: South by South Mess" aired last night, and this time, the show's resident political satirist Jason Jones hit the streets of Austin to ask Texans what's most important to them in this election cycle. The answers? The border, guns, women's health, gay rights, and everything in between. Oh, and secession.

Before Jones' segment, Stewart riffs on a few midterm races across the country, including Mitch McConnell's desperate attempts to get supporters out to his campaign rallies and Scott Brown's latest run for U.S. Senate. Stewart also dogs on some Democrats who are actively distancing themselves from President Barack Obama.

Back here in Texas, Jones talks to a few folks about what's on their minds this election season. Recognizable faces include Chuck Smith with Equality Texas and Dyana Mercado with Planned Parenthood Texas Votes, as well as a representative of Open Carry Texas, which lobbies for open carry gun legislation in the Lone Star State, who calls himself "pro choice," in that he can choose whether or not to carry a firearm.

It's no secret Texas' often troubling policies are getting national attention lately, and Jones and Nashville-based country music artist Brad Paisley seize the opportunity to croon about the Lone Star State in what they call "the world's best country song."

After Jones' segment, Stewart sits down with U.S. Rep Joaquin Castro, opening first, of course with a twin joke about him and his brother Secretary Julian Castro. Stewart goes on to ask Castro about the terrible inner workings of Congress and money in politics. In their extended interview, to two cover Republican obstructionism. Stewart also tells Castro that producers invited Texas Republicans, including U.S. Sen. Ted Cruz, gubernatorial candidate Greg Abbott and incumbent U.S. Sen. John Cornyn to be on the show and they declined or didn't respond.