The Queque has always had this fantasy in which three commanding, height-weight-proportionate Democratic statesmen were sprawled out before us, promising to sustain our electoral arousal all the way through the presidential primaries, which state reps Trey Martinez Fischer, D-San Antonio, Helen Giddings, D-DeSoto, and Roberto Alonzo, D-Dallas, are trying to bump up on Texas’s calendar. Why should those skanks in Iowa, New Hampshire, and South Carolina get all the attention?

“The candidates come suck us out like an ATM machine and then run commercials there,” says Martinez Fischer, who says moving our primary from March 4 to February 5, 2008, will help get the Rock Star, the Joel Osteen/Robert Redford lookalike who had a rally/fundraiser in San Antonio last week, and the candidate suspected of going both ways to suck and spend right here. Even though Texas sends the second-largest number of delegates to the Republican convention and the third-largest to the Democratic, we’ve always sent them too late to affect the presidential nominee, Martinez Fischer says. 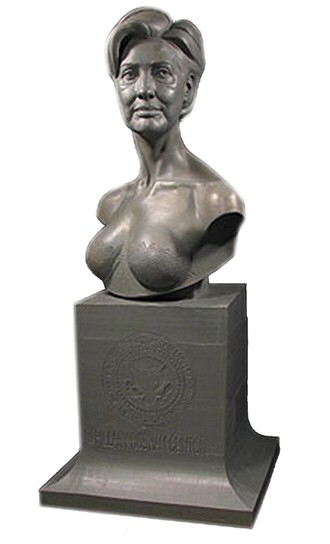 For the record, the Queque’s not the only one sexualizing this slate of Dems which, according to the latest New York Times/CBS News poll, six out of 10 Democratic voters are cigarrette-after-sex satisfied with, as opposed to the six out of 10 Republicans who wanted more choices. Last month’s Mother Jones describes a bust of Hillary Clinton, unveiled in Manhattan’s Museum of Sex thusly: “It showed the New York senator with a long, elegant neck and solemn expression above two perfectly round, youthful, barely covered breasts. I’d guess a 36B.” Nice.

Monday was the deadline to get your name on the May 12 City Council ballot. Of course, not all names are considered equal in this big, biased world of ours — obviously, a guy named Hardberger will get elected in Texas: he might as well be named Tough T-Bone — so the lesser-knowns will try anything to stand out. Mayoral candidates Julie Iris Oldham and Michael Idrogo want their nicknames on the ballot: Perennial gadfly Oldham has asked for Julie to be replaced with “Mama Bexar” and Idrogo wants “No Corruption” inserted as his middle name. Even District 8 podiatrist Morris Stribling is trying to sneak his medical credentials onto the ballot. Taking on Mary Alice Cisneros in District 1, Rosa Mercado has extended her ballot name to R. Esmeralda Monreal de Mercado, playing super-Latino quantity against the Cisneros dynasty.

By 5 p.m., 36 candidates had applied for a spot in the May contest, setting up places 5, 7, and 11 (the mayorship) as the most crowded races. Districts 3 and 9 are the only uncontested slots, with Roland Gutierrez and Kevin Wolff holding their incumbencies. (We’ve our own name-recognition issue with Kevin; how many times do we have to disclose, “No relation to our editor, Elaine Wolff?”) You can view the entire list of candidates, as well as their applications, online at Tinyurl.com/2wkdun. Why would you want to? The Queque has a couple mischievous suggestions:

• Add all their home phone numbers and addresses to your Blackberry, and pretend to be important. But remember, harassment is illegal!

• For $9 and an hour’s worth of cutting and pasting (digitally or manually) from an application, you can turn a candidate’s handwriting into a computer font using Fontifier.com. Forgery is also illegal ... but making authentic-looking spoof documents for Chisme Libre, the Current’s blog, is not!

If the Queque has been uncommonly brutal to the Express-News of late, we can assure you we’re not going to let up anytime soon. We can’t speak for the rest of the Current, but the Queque has declared war against 210SA, the E-N’s bastard daughter. Just like when their umbrella corporation Hearst gobbled up Prime Time Incorporated’s community weeklies, the E-N is deliberately downplaying the relationship. We’d take on Hearst itself, but everyone knows what happened to Orson Welles. Mark our words, the Queque will never be a fat-ass has-been.

To be perfectly clear: The Queque isn’t afraid of new competition. We’d relish the chance to sharpen our hatchets. If only 210SA’s editorial staff would actually present a challenge. No, they’re targeting a market niche with a corporate, inorganic, uninspired model that caters to advertisers first and readers second. The proof? They have a staff writer and a handful of “contributors” that are actually sidelining E-N staffers, but the rest of the copy originates with:

As for the Current, the bulk of our content is written in-house or drawn from our pool of faithful local freelance talent. When we do draw from the alternative-newsweekly wire, it’s only because there’s something we think you ought to read or some minor catastrophe causes a last-minute news hole.

If the E-N is the “Excuse for News,” then 210SA is “The Cure for the Original,” cultural homogenization at its very worse. (Didja see the bland, if not stale, “Single File” column last week, in which the writer weakly argues for the HPV vaccine? If she wanted to talk about Gardasil, she could’ve used the platform to discuss what HPV actually does to the vagina, including dyskaryosis, a cervix-tissue abnormality. And, yes, the Queque said vagina, because that’s what it’s called. The accompanying article on 210SA’s embarassingly prude “Sex & Fitness” page discusses the Brazilian wax, using the euphemism “in between down there” instead of just saying what they mean: a bald pussy).

Stick close to the Current; we’re not twats.

See you at the anti-war protest with the Southwest Workers Union, 10 a.m. at the recruiting center across from San Antonio College at 1700 N. Main!