The Shale Boom's Hard Sell Begins Pushing Up Against Reality 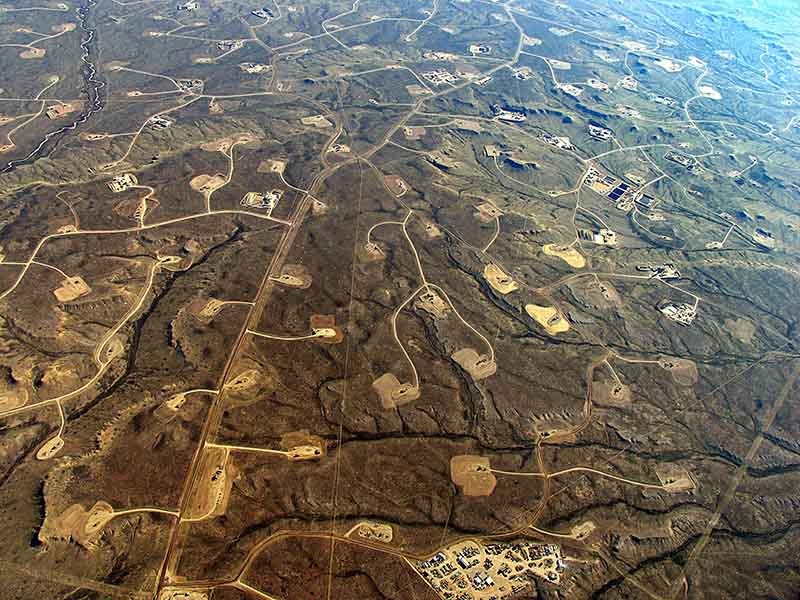 EcoFlight
An aerial perspective of the fractured landscape in Wyoming, where more than 1,000 wells have been abandoned

It's also important to make a distinction between gas and oil because those economics differ, too. Oil's relatively high price makes it significantly more economical than gas–for the moment. It wasn't always this way.

Indeed the first unconventional wells were typically focused on gas. Oil only began to predominate in the shale after gas producers screwed themselves with overproduction. Propelled by natural-gas prices that rose to $13.50 per million Btu (MMBtu) in 2008, everyone dove headlong into the shale gas game. Within four years the market was flooded, sending prices down to $2 before they crawled back up to the present $3-$4 range.

"It was almost like the banks encouraged them," Rogers said. "They had to meet production targets so the analysts would keep giving them buy ratings and so they overproduced. Anybody could see where that was going to go."

The banks make their money on fees. So whether investors are buying or selling, as long as there are mergers and acquisitions, the banks stay flush. They can keep activity high by feeding the speculative froth.

"They're publishing research for a reason," Berman said. "It's not a public service."

The field is so capital-intensive that shale drillers can't afford to be too price-sensitive. They have to drill to service the debt, though they'll hew to the sweet spots if they can. The volatility and need for capital leads many companies to massage their bottom line with off-the-books financing schemes. These include hiding expenses in shell companies and the dubious practice of selling future well production.

The poster boy for this kind of sketchy behavior is former Chesapeake CEO Aubrey McClendon, who over-leveraged his company, driving it from a high of $69 per share in 2008 to $13.55 at its 2012 low ebb. McClendon was booted later that year after it was revealed he'd borrowed $1.1 billion against his personal stake in Chesapeake to fund a money-making perk in his contract, creating dramatic conflicts of interest.

"Chesapeake was the worst offender far and away," Rogers said. "But other CEOs were watching to see what they could get away with and then they oftentimes copied him after that. It was, 'Let him go out there because he's the consummate promoter.'"

Berman notes that the cash flow of 24 gas-dominant companies he follows–among them Anadarko, Devon Energy, Range Resources, XTO and Cabot Oil and Gas–is collectively $8 billion* in the red over the last four years, and they're $85 billion in debt.

"Anyone that wants to make a case these guys are making money needs to explain that," Berman said. "These are real companies and they're losing their asses. Everybody assumes they wouldn't be spending money if they weren't making money, but everybody said the same thing about Merrill Lynch, Bear Stearns and AIG."

When shale gas producers did their lemming-like header into the drained pool, every company that could moved into the oil-dominant end of their acreage. But even these "wet" wells produce a good quantity of gas, which has prevented natural-gas prices from rising too high and suddenly shale oil producers find themselves compromised by the same issues that bedeviled shale gas.

The shale boom has allowed America to cut our petroleum imports from 60 percent to 30 percent, which combined with slow global growth (particularly in China) created an oil glut on the world market. In the past four months the price of benchmark West Texas Intermediate petroleum has fallen by 20 percent to $80 a barrel. Last month Goldman Sachs and Bank of America suggested the price would sink below $75 by next year. Rather than cut production, the Saudis have signaled they'll let the price fall.

T. Boone Pickens and others have suggested this could be part of a Saudi plan to squeeze U.S. shale oil producers who have much larger marginal costs. Ed Hirs, University of Houston energy economist and head of independent energy company Hillhouse Resources**, believes the Saudis' behavior has more to do with the relative strength of the U.S. dollar, which has lured foreign investors, in turn causing the dollar to rise in value against other currencies. Since oil is sold in dollars, the dollar's strength makes oil imports increasingly expensive for other countries.

"Any significant price increases are going to beat the holy hell out of demand," Hirs said. "We saw that last summer as India and Pakistan began to drop the demand as the dollar got stronger. Oil imports into India and Pakistan fell by 20 percent."

That pushes many producers up against their break-even point. Two weeks ago, a report from Sanford C. Bernstein & Co. suggested that a third of U.S. shale production is uneconomic at current price levels, let alone $5-$8 dollars cheaper.

Shale oil producers are enduring the same situation gas producers faced a couple years ago with one frustrating little difference. "Oil at $80 is going to have a big impact," Powers said. "They can no longer subsidize gas-drilling. They're so heavily leveraged production will drop off massively, which is going to have a big negative effect on these companies' abilities to generate cash flow. That is what will accelerate the end of the boom."