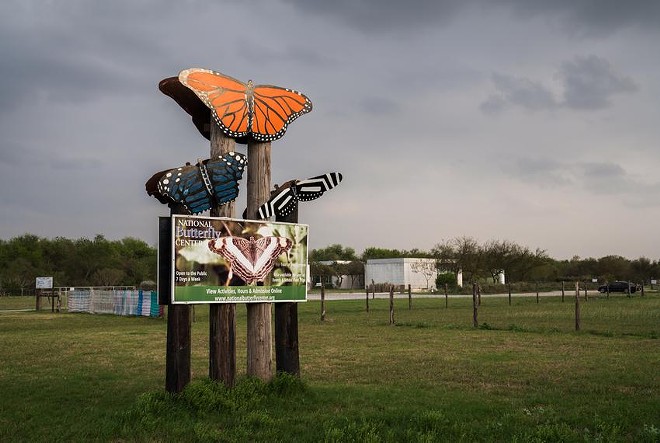 Texas Tribune / Veronica G. Cardenas
The National Butterfly Center is a 20-year-old nature conservatory for wild butterflies.
A South Texas butterfly sanctuary has closed after it was the target of conspiracy theories that escalated into credible threats.

The National Butterfly Center, along the U.S.-Mexico border in Mission, has long been the target of QAnon conspiracy theories falsely tying the organization to human trafficking.

The center is a 20-year-old nature conservatory for wild butterflies. There are no law enforcement investigations into the organization or its staff for human trafficking.


“They tell these lies in a variety of forms through all of their channels to provoke stochastic terrorism,” said the center’s executive director Marianna Treviño-Wright.

Treviño-Wright suspects the butterfly center attracted the conspiracists’ attention because of a lawsuit it filed against the Trump administration in 2017. The center argued that proposed border wall construction threatened to drive through the center and destroy butterfly habitats. Five years later, the lawsuit is still ongoing in federal court.

But the harassment did not stop. Treviño-Wright said she has been the subject of threats via phone, email and Twitter.

“There’s no way really to navigate it. You get at each day and you hope for the best and deal with whatever the day throws at you,” Treviño-Wright said. “Many of those days for the last three years have been pretty rough, some of them downright terrible.”

The harassment escalated in late January when a right-wing congressional candidate from Virginia, Kimberly Lowe, visited the nature conservatory, Treviño-Wright said. Lowe demanded the center give her access to the river “to see all the illegals crossing on the raft.” Treviño-Wright said Lowe tackled her when she asked Lowe to leave the premises.

The center closed last weekend during the We Stand America border security rally. Former state Rep. Aaron Peña had informed Treviño-Wright that the center could be a target during the rally and that she should “be armed at all times or out of town.”

Attendees of the rally, largely composed of staunch Trump supporters, did stop at the conservatory. Ben Bergquam, a contributor for the far-right site Real America’s Voice, posted a minutelong clip on Twitter, repeating false claims about sex trafficking.

On Wednesday, the butterfly sanctuary closed again — this time, indefinitely — due to safety concerns for staff and the public.

The false trafficking rumors around the National Butterfly Center echo “Pizzagate,” a 2016 conspiracy theory that claimed a Washington, D.C., pizza restaurant was the site of a child abuse ring led by Democratic presidential candidate Hillary Clinton. Pizzagate made headlines when a man fired a gun at the restaurant based on the false information.

QAnon, a far-right political conspiracy and movement, emerged shortly after in 2017 and falsely claimed a child sex trafficking ring conspired against Trump. Once limited to fringe platforms, QAnon conspiracy theorists have flooded mainstream social networks and have been accused of plotting or carrying out violent crimes. They were also among the mob of Trump supporters that stormed the U.S. Capitolon Jan. 6, 2021. The FBI has identified the movement as a domestic terrorism threat.

“It’s incredibly distressing that the United States has come to the point where a really significant part of the public is just no longer tethered to reality,” said Jeffrey Glassberg, the founder of the North American Butterfly Association, the parent organization of the butterfly center.

​​Glassberg has worked as a molecular biologist and patented DNA fingerprinting. He authored several books on butterflies before he established the butterfly center out of an empty onion field.

For the butterfly conservatory to be at the center of false trafficking allegations, he said, “nothing could be more absurd, frankly.”