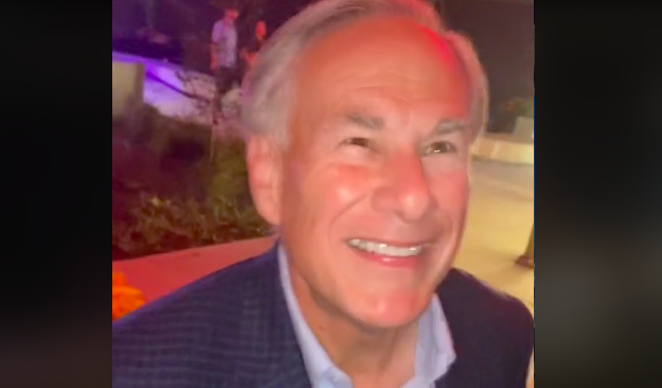 TikTok screen capture / @erickatzenberger
Gov. Greg Abbott grins and bears it while getting called a "douchebag."

A TikTok video of a Texas man confronting Gov. Greg Abbott and calling him a "douchebag" for signing the state's near-total ban on abortion has gone viral.

In the dance- and lip-sync-free clip shared over the weekend, the man greets Abbott outside a restaurant, at first appearing to be excited to meet him. Once the Guv rolls up, smiling and engaging in a handshake, the man lets his true feelings be known.

"Why would you sign a law telling women whether they can have an abortion or not?" he asks, still pumping the hand of the hand of the increasingly uncomfortable-looking Abbott. "That makes you douchebag!"

As of Tuesday morning, the clip has racked up more than 6 million views on TikTok and nearly 3,100 likes. A separate Twitter share of the video received more than 256,000 views and has been retweeted more than 1,300 times.

The clip was captured by Eric Katzenberger, 34, outside of Harper's Restaurant in Dallas, according to an Express-News report. The daily's story didn't include the colloquial term for a vaginal lavage device, instead opting for the more general description of "dirty word" to describe Katzenberger's insult.

Katzenberger told the Express-News that the incident took place Saturday while he was servicing linens at a hotel across the street from the restaurant. While the governor didn't respond to the vulgarity, his security detail wasn't pleased with the confrontation, the TikToker added.

What are the odds San Antonio artist Rafael Gonzales Jr., who this summer launched a line of "Fuck Greg Abbott" T-shirts, soon trots out new merch bearing a douchier slogan?