To Talk or Not to Talk: HemisFair and Convention Center designs 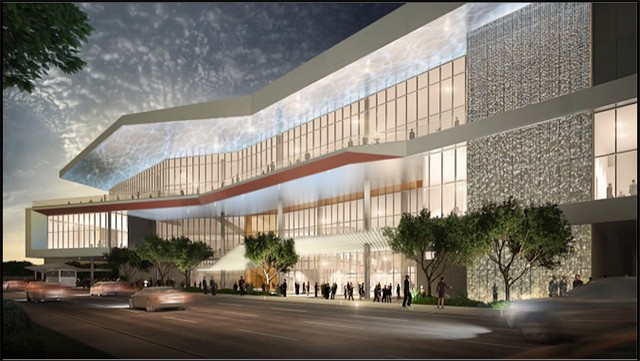 Taken together, the joint public input processes for both HemisFair park and the Henry B. Gonzalez Convention Center remind us of that Best in Show quote: “We could talk or not talk forever and still find things to not talk about.”

On the “talk forever” side is the HemisFair redesign, which will eventually allow for an 18-acre park on the site that’s now best known for the Tower of the Americas and the annual Luminaria arts festival. Since late 2010, the HemisFair Park Area Redevelopment Corporation has hosted meeting after meeting for interested citizens to re-envision the underutilized space.

Most recently, earlier this month HPARC gathered a moderate-sized group to discuss the civic park aspect of the plan. A kid- and arts-oriented swath, the so-called Plaza de Artes, on the southwest corner of the site, went through the input-process last summer, this week City Council will consider authorizing various related design and construction contracts.

“This is a party that we’re having,” said HPARC director Andres Andujar, by way of introducing the civic park conversations, which would be “more spiritual than spatial.” Tables of participants pawed through photos gathered by the HPARC committee of famous parks throughout the world to choose what appealed most, and then presented their opinions, in rapid-fire fashion, to the entire room.

The table we sat at included State Rep. Mike Villarreal (who carried the controversial bill to fast-track HemisFair development by not bringing it to a public vote), WestEast architecture firm Design Director Ignacio Aliaga, COSA staffer Mary Yturri, and HPARC facilitator Michele Jacob, among others. We favored open, flexible greenspace and trees for shade, as long as it came with some water conservation features. We couldn’t quite agree on whether any sort of business development, be it mostly residential housing (intriguing to Villarreal, to help “people the park”) or multiuse retail (favored by Aliaga to provide a more European feel), would be appropriate, although concession kiosks, public art, and outdoor markets appealed to all of us.

There seemed to be no real consensus among all of the tables as to whether multiuse development would be desirable at all — although city leaders may prefer that it fall into the “not talk about it forever” category, given that they pushed for the above-mentioned fast-track, no-vote option regarding the issue of private development on public land in this specific instance.

Andujar never addressed private development plans directly, although the master plan prominently displayed throughout the evening showed three unmarked beige rectangles, one attached to the new western edge of the convention center, one bordering Market and one bordering Alamo. Those who have seen a site plan before quickly identified the rectangles as buildings. The one attached to the convention center seems ideal for the rumored hotel that caused Rep. Villarreal to attempt to implement deed restrictions in his legislation’s language. The other two would likely be a mix of residential and multiuse retail.

During his table’s presentation, architect Mark E. Kellman pointed out that as currently sited, the two buildings running perpendicular to each other on Market and Alamo would inhibit views and access to the civic park from downtown. When, after the presentation, we asked him more about his opposition to any “vertical edges” in the park, and a nearby HPARC volunteer informed us in a panicky voice that those brown rectangles were merely sites, not necessarily buildings.

Thing is, while Andujar didn’t mention the rectangles in this particular meeting, in talking to him afterward, it became clear that multiuse development is already an integral part of his plan, whether San Antonians ask for it or not. “It’s going to be very expensive to do everything [with HemisFair],” Andujar told the Current after the meeting, “the City cannot pay for it all.” In his vision, revenue from multiuse development leases will funnel back into paying for the park, its programming, and its maintenance. Andujar will be the first to say that this is a novel concept, and he claims no other park in the world is following this model. Maybe that’s because they adhere to the whole “public” aspect of public parks. What will happen, though, if SA residents sell themselves on big dreams for the space, but don’t want the accompanying multiuse funding source? That’s another thing we’re not talking about…yet.

Compared to the neighboring Convention Center plans, however, HemisFair seems like an open book.

Last week, city council got a largely aesthetic-based update on the $325 million Henry B. Gonzalez Convention Center expansion, a project that’ll add 600,000 square feet of new space, allow San Antonio to brag about having the largest ballroom in Texas (if that’s a thing) and supposedly boost hotel occupancy and tourism – a claim that, historically, seems questionable.

Diego Bernal of District 1 began the charge, saying that while “8,000” meetings have been held around minutiae of HemisFair Park — down to, “the blades of grass” per square foot — the convention center project has comparatively received paltry public input, despite being publicly funded out of the 2012-2017 City Bond.

“I think there is sort of an expectation that there’s some play here, that if there is some part of the design that people don’t like, the council or maybe even the public, would have an opportunity to affect it a little bit,” said Bernal. “Because I think to say ‘here’s what you’re getting and this is it’ … I think that’s somewhat of a surprise.”

“It certainly feels like there is no opportunity for input,” the councilman said, noticeably agitated that the firm didn’t run their design elements by the public, let alone council first. He wasn’t the only one.

“So is this building going to be decided by consultants or by the residents of San Antonio?,” District 9 councilmember Elisa Chan asked pointedly.

When asked if SA residents were being made part of the process in an interview after the presentation, city engineer Mike Frisbee said well over 50 meetings with stakeholders – meaning those with a financial interest in the development – have been conducted since the outset of the project. But with average citizens or the council? Not so much.

Councilmember W. Reed Williams of District 8 countered his fellow members’ criticism, saying the lack of input is simply the nature of the fast-paced design-build process. And with construction set to start in September, the window for debate is closing quickly.

“Whether it’s right or wrong or indifferent, this process did not have a place to pick up the needle and come to council and the community for input, it just didn’t’ have it,” he said. “So right or wrong this is the process and we got to think about if this is the kind of process that we want.”