More than 30 longtime supporters, including Lloyd Doggett, showed up at Bexar County Commissioner Tommy Adkisson's humble campaign office in Precinct 4, on Southcross and Clarke, hoping the tide would turn in Adkisson's favor as he vied for County Judge against Nelson Wolff. Like turnout at the polls (a dismal 12 percent), this comparatively small show of support could be blamed on the chilly weather.

Early in the evening, Adkisson took the outdoor stage, apologizing for the less-than-ideal setting for an outdoor party (his office was open to supporters all evening) as his friend and supporter Fernando Hernandez played the piano and crooned a blues tune that started with "Big Boss Man ..." "It's my heartfelt wish that we stay the course," he said. "I have never raised a white flag."

Indeed, many of Adkisson's most ardent campaign volunteers share that sentiment. They too fight uphill, often against the tide of popular opinion, and when they couldn't get an answer from another politician, for better or worse, Adkisson was there.

When Krystal Henagan had an environmental health concern, "[Adkisson] was the only one that was responsive." Henagan, who spent most of the evening at Adkisson's campaign headquarters with her young son, noted that Adkisson wasn't even her representative, his precinct covers Southeast Bexar County while she lived in Northeast San Antonio. Nevertheless, "He got me in touch with the right people," said Henagan, who claimed that thanks to Adkisson's advice, she was able to get in touch with her state representative, Speaker of the House Joe Straus, who has helped her navigate the state channels to address the issue. In appreciation, she phone banked for Adkisson. Wolff, she claimed, received a campaign donation from one of the local companies she'd like to see better regulated, sealing her support for his primary opponent.

Kelly Reid Walls, a longtime animal advocate who runs Homeward Bound Dog Rescue, said she found an ally in Adkisson in her quest to address the massive stray animal issue in San Antonio. "Tommy has an appreciation for how numbers can be manipulated and some of the issues with prosecuting animal cruelty cases ... and the need to spay and neuter animals," she said. "Nelson has never answered an email from the rescue community," she continued, referencing the current County Judge.

Jim and Lou Lambeth have also been longtime supporters of Adkisson, but unlike Henagan or Walls, they live in his precinct. "He's been a good commissioner," said Jim, "Beyond that, he's stood by us on the toll road issue." The Lambeths are passionate foes to the toll roads they feel are threatening their ranching community near Calaveras Lake in Southeast San Antonio. Since 2007, they have testified locally and at the state level and Adkisson first crossed their radar as the chairman of the San Antonio-Bexar County Metropolitan Planning Organization.

Of course, the toll roads have turned into one of Adkisson's biggest millstones. His relationship with staunch toll road opponent Terri Hall has raised questions. He's spent years fighting the Express-News' request to access personal emails that may show he had improper conversations regarding the issue with Hall during his chairmanship of the MPO. The subsequent tarnish to his image gave his opponent an easy shot, as politics forced the old friends further and further apart. It may have also helped poison the well to begin with, as many wonder why Adkisson would choose to challenge Wolff; the Judge has looked more favorably on toll road proposals in the past. And, as Wolff was also quick to point out on the campaign trail, if Adkisson felt so at odds with Wolff, he had a funny way of showing it on the dais. He voted for some of the "legacy projects" he spent his most recent campaign criticizing Wolff for.

Adkisson hasn't turned against all his powerful political friends however. U.S. representative Lloyd Doggett and his staff dropped by the watch party for a substantial chunk of time. "Thanks to Tommy," Doggett told one of Adkisson's volunteers, "this is where I had my first campaign office in San Antonio." According to his staff, Doggett was making the rounds to several primary parties, but not on his agenda was a stop at Mi Tierra's, where Wolff was holding his own celebration. 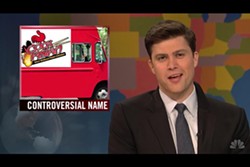 Right before 9:45 p.m., after watching results stagnate at 56 percent for Wolff and 43 for Adkisson, the commissioner got on the phone and conceded. He then went outside with his wife Karen, to tell the many supporters still waiting. "You've been wonderful, steadfast, valorous and classy," he told the mostly older and largely Latino crowd. "I don't think we should do anything other than be good sports ... Let this be another step upon which we will build greater things," he said, while obliquely referencing "the other side," which would now "need us more than ever."

Adkisson was visibly moved, but dry-eyed, while his wife couldn't stop the tears as they publicly said goodbye to 15 years on the Commissioners Court (several candidates vied for the open Precinct 4 seat, and both parties will have a primary run-off for it in May). After ending his speech, the soon-to-be 65 year-old said he had "a world of options" open to him after officially departing the Court pending November's general election, including returning to his law practice. When asked what would happen to him after he stopped being what many of his supporters called "the only politician who listened," he said, "I'll make my values felt on a whole range of issues," and said despite the fractured nature of the local party, he planned to continue his 46-plus years as an active Democrat.

There may have been a tear in his eye, but then again, it was awfully cold out.