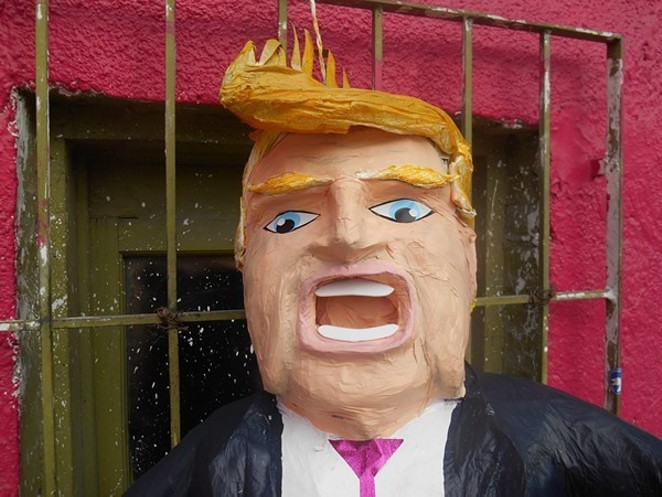 Pinateria Ramirez/Facebook
Some top Texas Republicans are finally ditching Donald Trump. And all it took was Friday's revelation that Trump's self-described "locker room banter" includes cracks about sexually assaulting women, saying that, since he's a celebrity, he can just "grab them by the pussy."

Published online by the Washington Post Friday night, the decade-old video that captured Trump discussing forcing himself on women, saying that “when you’re a star, they let you do it,” triggered a cascade of denouncements from top state Republicans. Some, like Lieutenant Gov. Dan Patrick, chairman of Trump campaign's Texas operations, rushed to decry Trump's comments while still indicating they'd support the GOP presidential nominee who, according to another creeptastic Trump report last week (this time via the Associated Press), repeatedly harassed women on the set of his hit TV show The Apprentice, during which he "rated female contestants by the size of their breasts and talked about which ones he'd like to have sex with."

"There is absolutely no excuse to ever talk about women in such a crude and demeaning way," Patrick said in a statement, after which he said Trump's comments shouldn't "distract voters" from how scary Hillary Clinton is.

Others condemned Trump without explicitly saying whether they'd drop their support for the candidate. "Deeply disturbing rhetoric by Trump. An insult to all women & contrary to GOP values. Absent true contrition, consequences will be dire," Gov. Greg Abbott wrote on Twitter. U.S. Sen. Johny Cornyn also took to Twitter to say, "I am disgusted by Mr Trump's words about women: our daughters, sisters and mothers. ... And I am profoundly disappointed by the race to the bottom this presidential campaign has become."

Still, other top Texas Republicans and conservative activists have now explicitly dumped Trump despite him being their party's nominee. That includes Congressman Will Hurd, the South Texas Republican locked in a dead-heat race for the state's only competitive congressional seat this election. While Hurd has largely tried to stay mum on Trump, he came out swinging Friday night, reportedly telling the El Paso Times via text message: “I find Donald Trump’s comments that were released today to be utterly sickening and repulsive for all women and Americans." Hurd urged Trump to "step aside for a true conservative to beat Hillary Clinton.”

The fallout comes as Trump is scheduled to appear at two Texas fundraisers on Tuesday – one in Dallas and another at the Grand Hyatt in downtown San Antonio. Even before the Post published Trump's "grab them by the pussy" comments Friday night, local Republican leaders appeared to be taking a hands-off approach to their GOP presidential candidate's visit. When we reached him earlier on Friday, Bexar County GOP Chair Robert Stovall couldn't even remember the day of Trump's scheduled visit. He said Rick Perry (who famously called Trump “a cancer on conservatism” last year) and Patrick would probably attend the fundraiser.

That fundraiser itself, the second to be thrown by IBC Bank's Dennis Nixon and local real estate developer Gene Powell, now appear to be on shaky ground because of the latest cringe-worthy scandal to hit the Trump campaign. As the Dallas Morning News first reported, it appears Powell, who has co-chaired Trump’s Texas finance team, has pulled out of the event. (*Update 3:30 pm: Despite multiple earlier reports that Powell had abandoned the fundraiser, the Express-News' Peggy Ficac reports that an "offended" Powell has committed to staying with the campaign until after the fundraiser, saying in a statement to the daily, "I made a commitment to the campaign and I have one obligation left to the campaign and that is a fundraising event tomorrow in San Antonio and I will fulfill that obligation as promised.") Prominent Houston attorney Tony Buzzbee, who hosted a fundraiser for the GOP presidential candidate in June, wrote on Facebook this weekend: “Sorry Donald. I’m done with you. Completely.”