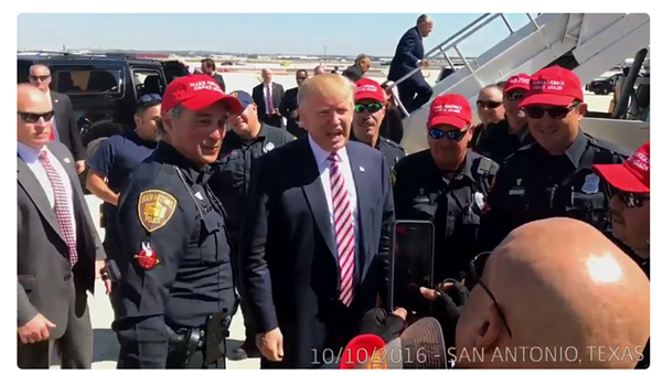 Twitter/Donald Trump
It's been a week since a dozen or so San Antonio police officers donned red "Make America Great Again" hats and merrily posed for photos with Donald Trump. Mayor Ivy Taylor and Police Chief William McManus, quickly condemned the officers for appearing to endorse a candidate while in uniform, in hopes of putting the cringeworthy moment behind them.

Trump, however, isn't ready to let it go.

In a radio interview with Joe “Pags” Pagliarulo, a conservative pro-Trump local talk show host, Trump said he was "so sad" to hear that Mayor Ivy Taylor reprimanded the officers.

"I assume he's a Democratic mayor," Trump said, also assuming the city's mayor was a man. Pagliarulo corrected him.

"Uh, she should be ashamed of herself," Trump replied.

If the police had been wearing a "Crooked Hillary" hat, he added, no one would have cared.

"I tell you, I've seen this, a lot of people feel the same way," Trump said. "With what [the police] do and the way they put their lives at stake, and for her to criticize them, she should be ashamed of herself."

Trump added that his campaign has "close to a hundred percent police support."

"Who's going to support [Clinton]? She's not for anything having to do with law and order," he said.