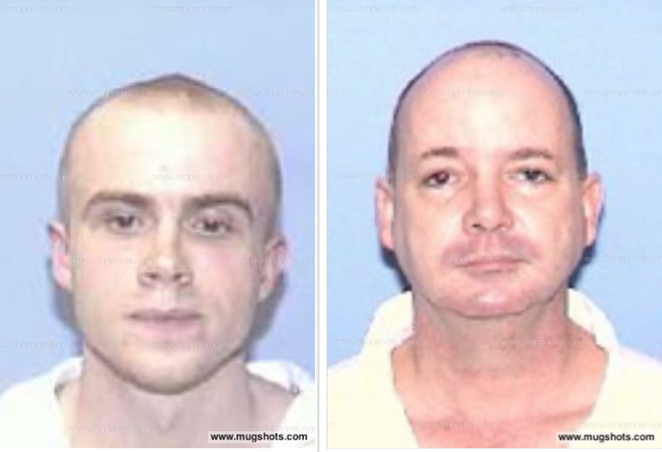 mugshots.com
Robert Pruett, Anthony Shore
Two Texas inmates sitting on death row will be executed later this month, after the United States Supreme Court declined to listen to their appeals on Monday, according to the Associated Press.

Robert Pruett, who is 38, received the death penalty for stabbing prison guard Daniel Nagle in a South Texas prison in 1999, according to the AP. He had been in prison since he was 15, serving a 99-year sentence for being an “accessory to murder” when his father stabbed and killed their next-door neighbor.

Previously, a judge halted Pruett’s execution two hours before he was scheduled to die in 2015, so that more DNA tests could be conducted on the weapon used to kill the prison guard. Pruett has maintained his innocence since 1999, but his attempts to use DNA evidence to prove his innocence have been fruitless.

Pruett is scheduled t0 be executed on October 12.

Houston police obtained Shore’s DNA sample in 1998, after Shore was convicted for molesting his two daughters — a crime he paid for with $500 fine and eight years of probation, but no jail time. It wasn’t until 2003, when Shore’s DNA sample was finally tested, that police realized he matched the DNA found back in 1992 on Shore’s second victim. Shore confessed to all of the murders during his interrogation.

Shore is scheduled to be executed October 18.

Five death row inmates—all accused of murder— have been executed in Texas this year.