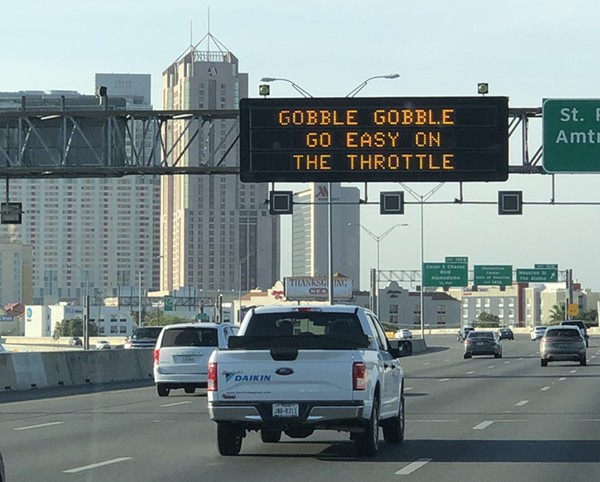 Via @ermillo2013 on Twitter
Texas Twitter's guffawing over the snappy Thanksgiving messages the Texas Department of Transportation is sharing this week via its digital message signs.

"Gobble Gobble, Go Easy on the Throttle" one sign reads, while another advises drivers to "Feast Your Eyes on the Road" for maximum safety. Some Twitter fans approved with LOL-ing emoticons while others wrote the messages off as dad humor.


Thank you San Antonio for starting off my day right 😂 pic.twitter.com/hF5UsphbOg

Who’s dad is typing out these electronic highway signs?
“Gobble gobble, easy on that throttle!”

Either way, the signs made folks pay attention, and that's what TxDOT was gunning for. Thanksgiving means busy roads, and whether people are pairing a nice Cru Beaujolais with their turkey or a few Buds with the big game, far too many end up lit behind the wheel.

"Sometimes we feel the need to get drivers' attention to get them thinking about improving their safety," TxDOT spokesman Mark Cross said, adding that 3,800 people died on Texas roads last year.

We're enjoying the Twittersphere's take on TxDOT's snappy wordplay, just make sure you observe traffic laws and pull over before weighing in. It'd be a shame to smash up your ride over an eye-roll emoticon.