Texas' 'trigger law' which goes into effect following the court's ruling will ban the procedure, offering no exception for cases of rape and incest. 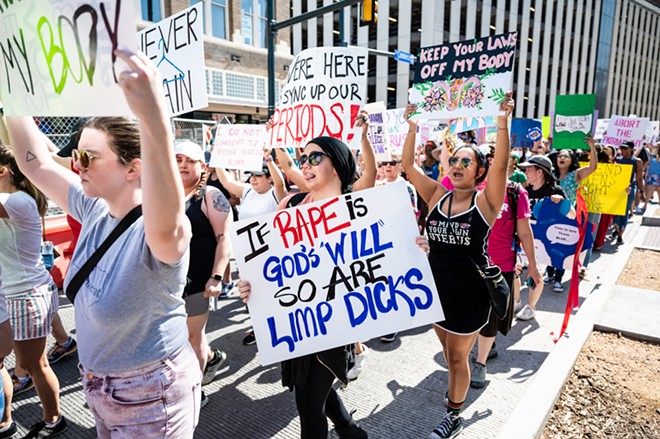 Jaime Monzon
Protesters take to San Antonio streets during a march this spring to protect abortion rights.
The U.S. Supreme Court overturned Roe v. Wade Friday, eliminating a nearly 50-year-old constitutional protection for abortion and setting the stage for Texas and other Republican-controlled states to completely ban the procedure.

A current Texas law would ban all abortions starting 30 days after the high court's ruling with no exceptions for rape or incest.

The 6-3 ruling by the conservative court will have vast consequences for reproductive health nationwide.

More than half of all states are likely to outlaw the procedure in coming months, many through so-called "trigger bans" such as the one adopted by Lone Star State lawmakers. All of Texas' neighboring states, with the exception of New Mexico, are expected to implement bans.

"We know you may be feeling a lot of things right now — hurt, anger, confusion. Whatever you feel is OK," women's health provider Planned Parenthood said in a tweet. "We’re here with you — and we’ll never stop fighting for you."

The clinic operator urged those who need an abortion to call (800) 230-PLAN or visit the website abortionfinder.org to seek care.

The Supreme Court handed down the ruling after considering a case involving a Mississippi law that would outlaw nearly all abortions after 15 weeks of pregnancy. Lower courts had ruled the measure was unconstitutional because it flew in the face of the national right to abortion established by 1973's Roe v. Wade ruling.

In a statement, Democratic gubernatorial candidate Beto O'Rourke said the ruling demonstrates the need for Texas voters to reject Gov. Greg Abbott, the Republican incumbent, in the November election.


“The Supreme Court has sent this back to the states, and our state’s current governor has outlawed abortion beginning at conception with no exception for rape or incest," O'Rourke said. “If you care about protecting a woman’s freedom to make her own decisions about her own body, health care, and future, join this campaign and help us win.”