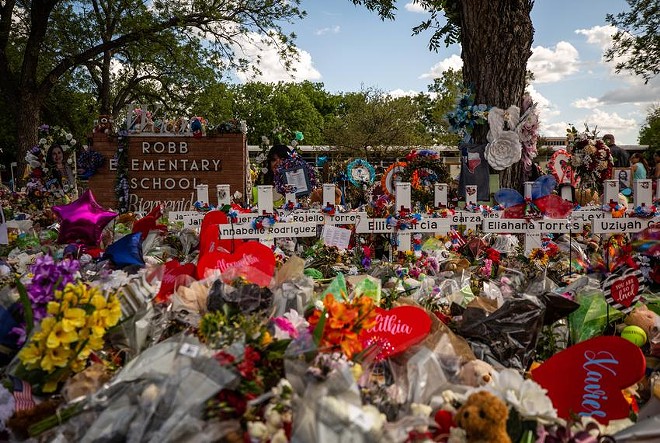 Texas Tribune / Kaylee Greenlee Beal
Flowers and gifts sit in front of wooden crosses memorializing the 21 victims of the May 24 mass shooting at Robb Elementary in Uvalde.
The principal of Robb Elementary School, who was placed on administrative leave more than two months after a mass shooting there, has pushed back on some of a Texas House committee’s conclusions about campus security.

In a letter to the House committee investigating the May 24 shooting, Mandy Gutierrez argued that the door to the classroom the gunman is believed to have entered had a functioning lock, that she was trained not to use the school’s public address system during shooting situations and that there was not a culture of complacency about security at Robb Elementary.

“It is unfair and inaccurate to conclude that I ever [became] complacent on any security issue of Robb Elementary,” Gutierrez said.

The House committee report pointed to several failures in law enforcement’s response to the shooting and issues at Robb Elementary that allowed the shooter to enter the school unobstructed before killing 19 children and two teachers.

Gutierrez’s letter responds to parts of the House committee report in which she was mentioned. The report concluded that while Robb Elementary’s active-shooter policy called for classroom doors to be locked, multiple witnesses said employees often left interior and exterior doors unlocked or propped open. Additionally, the report stated that the door to Room 111 — which investigators believe the shooter entered — was known to be faulty, though no one made a substantive effort to repair it.

Gutierrez outlined several points that she said proves the door to Room 111 had a functioning lock, including daily checks by custodial staff. She added that in “an aged building” like Robb Elementary, some doors needed to be forcibly shut to engage the locking mechanism.

“Teachers know this and work around it,” Gutierrez said.

Gutierrez did not dispute the report’s assertion that some staff didn’t follow safety policies requiring doors be kept locked.

The report also said school staff didn’t reliably receive notices from the Uvalde schools alert system, and some personnel didn’t always respond with urgency. The committee said that Uvalde’s prevalence of “bailout” alerts — instances when human traffickers trying to escape the police crash a vehicle and cause the passengers to flee in many directions — “dampened everyone’s readiness to act.”

Gutierrez rebuffed the notion that “bailouts” created a culture of complacency.

“We were trained to treat every alert from any law enforcement agency as a situation with the high potential to escalate into a dangerous episode for students, teachers, and administrators,” she said.

Pointing to her performance review, Gutierrez noted that she was given an “accomplished” rating for creating a safe school environment.

The report also noted that the school had unreliable Wi-Fi service, hampering a mobile app alert system used by school staff. Gutierrez said more evidence would be needed to confirm why some teachers and employees may have not received the alert. She said well-known Wi-Fi issues slowed her ability to send a message about an active shooter, but that when she called Uvalde school district police Chief Pete Arredondo, he indicated he was aware of the alert.

The report stated that no one used the school intercom system to communicate the lockdown, which Gutierrez said was a result of her training.

“Our training emphasized that using the Public Address System could compound the problem in creating a panic situation with students and an alert to one or more gunman that was present to do maximum harm,” Gutierrez said.

Uvalde Consolidated Independent School District’s spokesperson, Anne Marie Espinoza, did not respond to a request for comment for this story on Wednesday.

In a text message to the The Texas Tribune, the committee’s chair, state Rep. Dustin Burrows, R-Lubbock, said, “I have not received the letter Ms. Gutierrez claims to have sent. The committee relied upon the testimony of interviews of multiple employees of the Uvalde CISD (including staff and administration) and the Uvalde CISD Police Department in coming to its conclusions related to the practices that took place at Robb Elementary School.”

Gutierrez is the third local official and the first school administrator to be suspended since the shooting. Uvalde police Lt. Mariano Pargas, who was the city’s acting police chief the day of the massacre, was placed on leave the day of the report’s release by the city manager.

Arredondo, the chief of the school district’s police department who has borne much of the blame for the delay in confronting the shooter, is on unpaid leave; a scheduled school board meeting to decide whether to fire him was postponed last week.