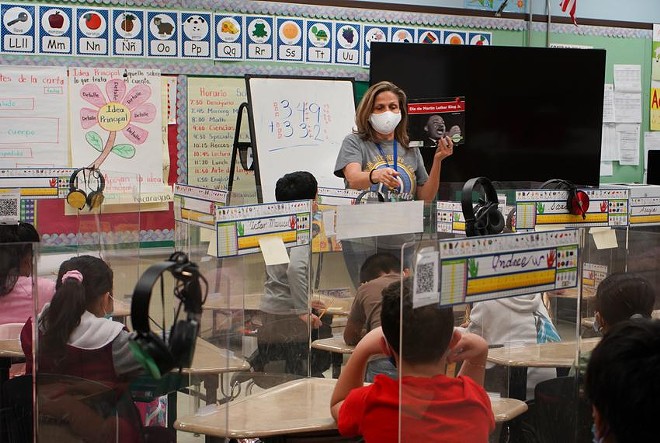 Texas Tribune / Miranda Lipton
Students learn about Martin Luther King Jr. in Rosa Ramirez's second grade class at Linder Elementary School in Austin on Jan. 14, 2022.
Katrina Rasmussen was an eighth grade student in North Texas when she watched the raw, televised images of kids her age running from their Colorado high school while bleeding students and teachers were carried into parked ambulances.

Now, 23 years later, she watched the tragic week’s events in Uvalde unfold as a high school teacher herself, in Dallas and she says it is as if nothing has changed since the Columbine High School shooting.

“We feel like we’re at the mercy of people who don’t even know what it’s like in the classroom,” she said.

Across the state, teachers in Texas are finishing out one of the toughest years they have ever seen. A global pandemic closed schools and forced more than 5 million public school students onto laptops and desktop computers at home.

This was to be the successful road back to normalcy for public schools. But after two large COVID-19 surges, a year of angry school board meetings, parents claiming teachers were grooming kids for abuse, and fights over everything from mask mandates for students to what books they can read, teachers were already at a breaking point with nearly 500 quitting even if it meant losing their license.

On top of all of that, Texas passed a law last year prohibiting teachers from discussing “a widely debated and currently controversial issue of public policy or social affairs," the state's so-called "critical race theory" law. And both state lawmakers and Gov. Greg Abbott have called into question books in school libraries about race, gender and sexuality and asked education officials to develop standards to keep "pornographic" books from school shelves, after singling out titles that include LGTBQ characters.

Rasmussen said watching the news about the shooting at Robb Elementary School which left 19 children and two teachers dead, including the news conference by Gov. Greg Abbott and other state leaders, she feels she has no control over how to respond to these mass shootings.

“People who have never taught before, make policies that affect every moment of my day, she said. “Right now, that’s really what cuts me the deepest.”

Lakeisha Patterson, an elementary school teacher in Deer Park, said it’s been exhausting watching so many school shootings over the years. When Columbine happened, she said there was a shockwave felt across the country and people came together demanding for change and for action to happen.

Now, she says that she’s tired of hearing the words “thoughts and prayers” after every tragedy.

“As a teacher, not only am I responsible for curriculum, but I have to be a counselor at times a parent, a guardian, a cheerleader, supporter, a nurse, a custodian and now I need to be a police officer,” Patterson said.

A day after an 18-year-old gunman opened fire in a classroom in Uvalde one of Luaren Gonzalez's students asked her a gut-wrenching question.

“Miss Gonzalez, are we safe?” her third grader asked her.

Gonzalez, who teaches in the Pasadena Independent School District, she felt she had to be strong for her students who were the same ages of those who were killedin Uvalde on Tuesday.

“That really got me,” Gonzalez said, trying to hold back tears. “That was something that just really hurt my heart.”

Even before the horrific shooting in Uvalde, the mood among Texas teachers has been one of resignation. Literally.

And that’s on top of a teacher shortage the state was experiencing before the pandemic that is now exacerbated by the return to school forcing Gov. Greg Abbott to create a commission to come up with solutions.

Public education advocates and teachers themselves, fear that this latest incident will be the breaking point for teachers that were already considering leaving the profession since the pandemic hit. All while Texas is already facing a teacher shortage.

Teachers have been leaving with the fear of a shooting happening for years and everytime one occurs that fear just keeps compounding, said Alejandra Lopez, president of San Antonio Alliance of Teachers and Support Personnel.

“We are talking about compounding crises,” Lopez said. “We have the lack of funding and resources, we have had to endure two years of a pandemic and now the reality of school shooting.”

Already there have been more than 200 mass shootings in 2022, according to the The Gun Violence Archive, an independent data collection organization. Teachers, whether here in Texas or anywhere else, feel the pain of shootings in their communities as schools most of the time serve as a community hub.

Lopez said people need to reject the premise that teachers need to be prepared for these incidents and instead figure out ways to stop them from happening entirely. That starts with making it harder to get guns.

Ron Acierno, executive director of the UTHealth Houston Trauma and Resilience Center, said it is “insane” that people are asking how teachers can be better prepared for this situation when people should instead be calling for less gun violence and more gun reform.

“Are we really at that point where that's a valid question?” Acierno said. “It's like saying, how can we prepare children to be sexual exploitation or sex trafficking victims?”

Acierno said for teachers the fear or trauma can start with the school shooter drills they practice throughout the school year, especially for those that have already experienced past trauma.

“They're going into these drills, many of them having already experienced trauma in the background of their life,” he said. “They're dealing with the trauma of their students and then you put this over stress levels that are already very high.”

Nicholas Westers, a clinical psychologist at Children’s Health in Dallas, said it’s normal that students feel anxiety over the mass shooting, but that parents should keep an eye on it if it continues.

With children already dealing with behavioral issues from being stuck at home during the pandemic, Westers said during this time, parents and teachers need to give students reassurance that they will be safe and explain to them how.

“We all have physical needs for food, shelter, water,” he said. “That is most important because if you don't have that, and nothing else really matters and then right above that is safety.”

Westers encouraged parents to have conversations with their children about what they’re feeling, what they’ve heard and what their most worried about.

Andrew Hairston, a civil rights attorney and education policy advocate for Texas Appleseed, an organization that works to address systemic inequalities in state education, said the next steps forward should be a robust expansion of menta health experts in schools.

“That should be a priority for policymakers alleviate the suffering of teachers and young people to invest in those mental health resources,” Hairston.

Rasmussen, who signed her contract for the next school year on the day the shooting occurred, said she has been considering leaving the profession every year for the last couple of years.

“This year, I really was expanding my network, putting my resume out there and doing some deep soul searching over where I want to be this time next year,” she said. “Not from the standpoint that I don't like teaching anymore but from the standpoint of I don't know if I can live like this anymore.”

Many teachers this year saw a dramatic rise in behavior problems in the classrooms this year as students who attended virtual school from their kitchens or bedrooms, had to reaquaint themselves with sitting in a classroom away from home for more than seven hours.

Those increase in student behavior problems are one of the reasons, Darrell Nichols, 30, quit his job in April at a Brazos Valley charter school, near College Station, after teaching for seven years.

“I've been bitten; I've been scratched; I've been punched in my line of work over the last two years, with this last year in particular,” Nichols said.

But Nichols, who left teaching to go into sales, said this past week has hit him hard, particularly as he remembers all the active-shooter drills he did with his own students every few months. His kids are so used to them by now they don’t even question what they are doing.

“It is bringing up a lot of old feelings for me because I had to practice what those teachers drilled for,” said Nicholls, referring to teachers Irma Garcia and Eva Mireles who were killed on Tuesday at Robb Elementary School. “I had my kids hidden away from the window, the door. I would brace myself against the door with my car keys in my hand as a makeshift weapon if I needed to use them.”

He said watching Abbott and other state leaders come to Uvalde and ask for healing prayers for the community, also upset him.

“I didn’t get into the classroom, on the one hand, to be accused of grooming my students and on the other hand being asked to take an AR-15 clip for them,” Nichols said. “And no one I know got into the teaching profession for that.”