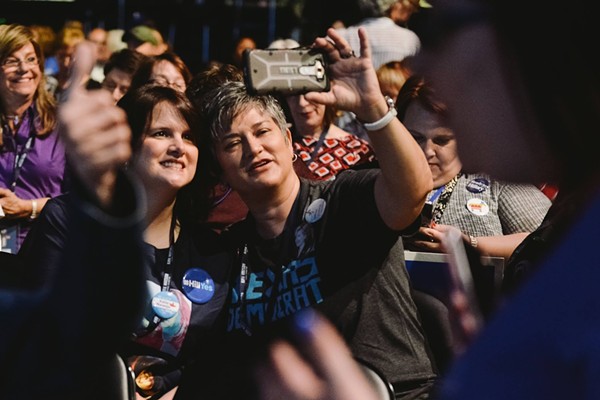 During the Texas Democratic Convention in San Antonio this weekend, officials approved a 40-plus page platform, outlining the party's goals, initiatives and hopes for the next year.

The document serves as a guide for office holders and provides insight into how Texas Democrats want to shape law and policy in the state. Texas' next legislative session starts in January 2017, where some of these platform statements may become bills.

Here's our breakdown of issues to watch that Democrats plan to pursue over the next couple of years:

Texas Democrats will continue to support repealing the state's voter identification law, which is currently tangled up in litigation in a federal appeals court. The law, which was implemented in 2013, requires people to present a photo ID before voting. Opponents of this law say it disenfranchises minority, low-income and elderly voters. Its supporters claim that the rule prevents voting fraud.

In 2010, the Supreme Court ruled that corporations could contribute unlimited amounts of money to political campaigns based on the reasoning that corporations had the same rights as people and that campaign contributions were protected free speech. Texas Democrats want that ruling repealed, even by constitutional amendment, if necessary.

A large part of the party's platform is dedicated to education, with Democrats seeking action on everything from restoring cuts to public schools to creating an equitable school finance system to stopping the use of public funds for private and sectarian organizations under the guise of "school choice."

The big one here is minimum wage. Texas Democrats want it to be $15 and hour, instead of $7.25. In 2015, there was an attempt to make a constitutional amendment to the Texas Constitution raising the minimum wage to $10.10, but it didn't make it to the November ballot that year. Look for more attempts to raise the minimum wage in Texas.

This one's a no-brainer: Texas Democrats agree they must fight any efforts to repeal the Affordable Care Act. Additionally, the party wants to see the state accept Medicaid funding.

Other health-related initiatives include convincing the Legislature to approve funding for needle-exchange programs, which were given the green light in 2015 as pilot programs. However, policy makers didn't include a funding mechanism in that bill.

Texas Democrats also reiterated their intention to repeal the Lone Star State's strict abortion law, which is now in the hands of the Supreme Court. Additionally, expect the party to oppose any Republican TRAP (targeted regulations of abortion providers) proposals.

The largest effort here will be attempts to reform background check laws by requiring waiting periods for law enforcement officials to conduct the checks. Additionally, Democrats want to see the gun show and in-state internet sales loophole that allows the sale or trade of weapons without a background check closed.

Texas Democrats also want to repeal open carry laws and enact gun control regulations curtailing "the availability of weapons with extended ammunition magazines such as those purchased by the shooter of U.S. Representative Gabrielle Giffords." In 2011, Jared Lee Loughner shot and killed six people with a semi-automatic pistol that had an extended magazine. Giffords survived.

Will marijuana reform in Texas continue? Democrats hope so. The party approved supporting federal and state decriminalization of cannabis, urging state leaders to regulate it the same way tobacco and alcohol are regulated. The party wants a system similar to Oregon, Washington and Colorado, where the sale of marijuana for recreation and medicinal purposes is legal. Additionally, Texas Democrats want to see non-violent offenders incarcerated on small-time pot charges released from prison, along with having those records expunged. Democrats also hope to improve the state's Compassionate Use Act, which allows people with intractable epilepsy to have access to CBD oil, sans THC, a derivative of marijuana.

As Texas' Lt. Gov. Dan Patrick promises to bring a bill to the Texas Legislature in 2017 that would prohibit transgender people from using the bathroom that corresponds with their gender identify, Lone Star State Democrats are reaffirming their opposition to that effort and their intention to better protect the state's LGBTQ communities.

The party wants to see a streamlined process for transgender individuals to obtain legal documents that are consistent with their gender identity and supports protections prohibiting discrimination against transgender people.

Texas Democrats also say they stand behind cities that have passed non-discrimination ordinances that provide protections for people based on sexual orientation and gender identity, which may face Republican challenges in the coming years.