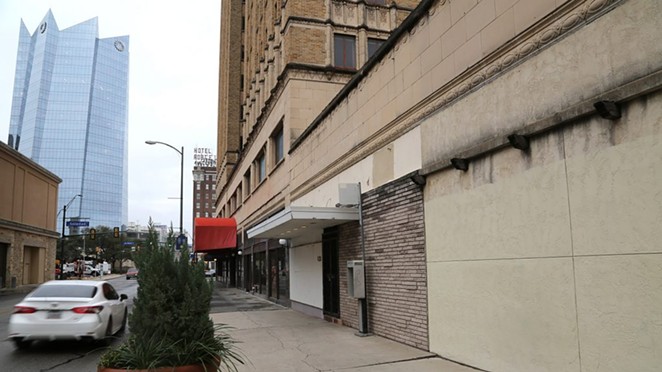 Ben Olivo / SA Heron
This one-story building at 123 E. Travis St. was recently purchased by Weston Urban.
Weston Urban has purchased an historic building on the River Walk that once housed the famous Navy Club nightclub in order to provide river access to the adjacent Milam Building, which it plans to refurbish.

The one-story building, 123 E. Travis St., sits on 0.19 acres of land beside the Milam and immediately south of the firm’s Weston Centre office tower. It is a block east of where the firm plans to build a 32-story apartment tower, downtown’s first residential high-rise.

“As we think about the future of the Milam, the fact that it can now enjoy direct access to the river, that was the driving force, clearly, behind the acquisition,” said Randy Smith, Weston Urban’s president. “What a beautiful stretch of the river right there—we think we can do something really special. But it’s too early to know exactly what that will look like.”

The firm still isn’t sure what it will do with the 21-story Milam, which it purchased in 2016. Smith said the building wouldn’t work as office space because of its low ceilings and other features that don’t jive with modern office trends.

“We’re still working on that,” he said. “It has not been an easy one. I know that it has a bright future, but I would be being less than forthright if I told you I knew exactly what it was.”

He declined to say how much the firm paid for the Travis Street building, which it purchased as two parcels from separate sellers on Jan. 14.

The parcels were purchased from the estate of Phillip Sfair, who had operated the Navy Club, county deed records show. Open from 1954 into the 1980s, the Navy Club was a “legendary” after-hours club which hosted Frank Sinatra and Glenn Miller, according to the San Antonio Express-News. Sfair died of a heart attack in 2011 at age 91.

With the purchase, Weston Urban now owns roughly 13.5 acres of property in west downtown, county property records show. Under a deal it reached with the city of San Antonio and Frost Bank in 2015—which resulted in its construction of the new Frost Tower in 2019—the firm is also set to acquire 8.8 acres from Frost and 1.9 acres from the city. Those properties will change hands after the city moves into the old Frost headquarters at 100 W. Houston St., which it is currently renovating at a cost of $141 million.

Weston Urban is also under contract with the city to buy the old Continental Hotel on West Commerce Street and an adjacent parking lot encompassing about 1.1 acres.

All in all, when the deals go through, the firm will own nearly 26 acres, making it downtown’s largest private landowner by a long shot. (On the southern side of East Cesar E. Chavez Boulevard, just outside downtown’s limits, H-E-B’s corporate campus occupies nearly 30 acres).

Weston Urban is still tinkering with the design for the 32-story, 351-unit apartment tower on Soledad, which received initial approval from the city’s Historic and Design Review Commission in December. Nothing like it has been built downtown—to date, the tallest residential building in the district is the 14-story Vistana. Yet Smith said he is confident in its success, even as the Covid-19 pandemic has roiled real estate markets.

“In the throes of COVID, there aren’t many things about real estate that aren’t challenging,” Smith said. “We believe those challenges to be temporary in nature, and we think that there’s a lot of opportunity lying in those challenges … Our strategy and optimism for downtown have not wavered in the least.”

The Continental Hotel property will cater toward students, faculty and staff from the mini-campus that the University of Texas at San Antonio plans to build nearby, along the course of the San Pedro Creek Culture Park, Smith said. Weston Urban plans to give the development an affordability component, he said.

Even as the pandemic rages on, Smith said he is “bullish” on the future of the office market. Some businesses, such as call centers, might transition to having their employees work from home, but fast-growing companies will always value office space because of the importance of forming trusting relationships with new employees, which can’t easily be done via Zoom calls, he said. And there will always be companies aiming to form a culture among their employees, which requires common working space.

“We don’t see it, and we don’t feel it, that the pandemic has been brutal to the office market, especially not in cities like San Antonio,” he said.