While Abbott Attacks, SAPD Updates Manual to Include Immigration Protocol 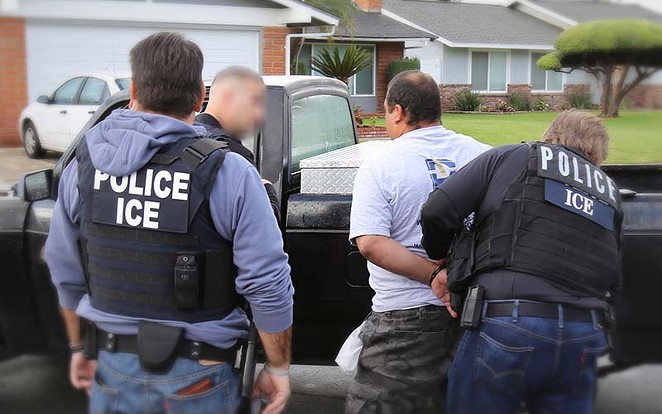 Immigration and Customs Enforcement (ICE)
The SAPD only calls ICE if a suspect has an active federal immigration warrant.

In the Lone Star State's five most populous counties — Bexar, Travis, Harris, Dallas and Tarrant — there are an estimated 866,000 undocumented immigrants, just a fraction of the combined 11.6 million residents in those municipalities.

Those estimates come from the Migration Policy Institute, an immigration think tank that compiled census data for 94 U.S. counties that are home to two-thirds of the nation's 11.4 million undocumented immigrants. Fewer than half qualify for President Barack Obama's Deferred Action for Parental Accountability (DAPA) program and would be eligible for driver's licenses and work permits.

In Bexar County there are 69,000 undocumented immigrants. The majority live and work in San Antonio, where the police department is in the process of updating its manual to reflect its previously unwritten policy of not asking people about immigration status.

Meanwhile, Abbott is threatening to cut off grant funding to sheriff departments in Texas that don't enforce the Department of Homeland Securities' Secure Communities program, under which local and state authorities submit fingerprints to not just criminal databases, but immigration databases as well. While this program is a leftover from the maligned leadership of President George H.W. Bush, Obama expanded it in 2011.

Not everyone plays ball, though. For instance, Austin, Dallas and Houston have sanctuary city policies, where police departments supposedly don't ask about a suspect's immigration status. Dallas County, in particular, has drawn Abbott's ire though it's also been a target of immigration-reform activists.

Abbott, however, can't interrupt the SAPD's practices unless the Texas Legislature passes a law, possibly in 2017, banning sanctuary cities — something it tried to do, but failed, this year.

In mid-October Mayor Ivy Taylor asked for the police department to clear up that inconsistency.

"It is my understanding that the San Antonio Police Department, through their successful application of community-based policing principles and strategies, has established a practical and efficient approach to dealing with immigrants that also ensures that dangerous criminals are remanded to the appropriate authority," Taylor wrote. "However, I also understand that SAPD does not have a written policy regarding their immigration procedures."

"I didn't talk to the Council about sanctuary cities," McManus said later to the San Antonio Current. "I talked to them about SAPD's unwritten protocols, unwritten policies, which is that we are here to answer calls for service, we are here to work with residents, homeowners, business owners."

Immigration is a federal jurisdiction, and police do notify federal immigration authorities when an arrestee has an active immigration warrant.

"We don't ask people for their immigration status because we are not federal immigration officers," McManus said. "You'll hear people say 'Well, didn't you swear to uphold all the laws?' Well, yeah, we did, but we are not trained nor are we sanctioned — I don't know if that's the right word or not — to enforce federal immigration laws. That's a complex issue."

If SAPD were required to enforce immigration laws, racial profiling would be rampant in a city that is around 60 percent Hispanic or Latino.

Alfredo Lozano, an immigration attorney, said he thinks that policy is the right approach, but said he's seen where that message is not trickling down to patrol officers who have asked some of his clients arrested on misdemeanor charges about their immigration statuses.

The SAPD isn't the only law-enforcement agency in town, either, and Lozano says he's seen some police departments in Bexar County's patchwork of municipalities ask his clients about immigration status.

Bexar County Sheriff's Department spokesman James Keith told The Texas Tribune that it's in the county's best interest to work with other agencies, including U.S. Customs and Immigration Enforcement.

As for Abbott's threats, both Lozano and Moreno characterize them as nothing more than generic anti-immigrant public-relation tactics used by conservative politicians to rally xenophobic support for re-election.