10 Wines For Your Summer Cookouts 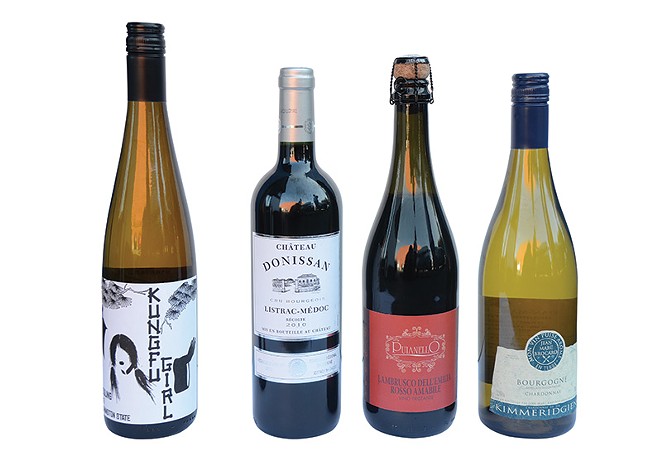 It's not just beef we're burning on the grill these days — from pizza to pineapple, it's all fair game. And it's not just beer we're drinking, either. Wines of all kinds work. White and sweet? You bet. Red and fizzy? Absolutely — all at $20 or under, and found at local wine shops.

Burgers: Assuming no flaming jalapeño component, malbec is a go-to choice. The modestly priced, but shamelessly fruity, Decopas 2014 Mendoza Malbec from Argentina has dark plum and black pepper in spades, plus soft tannins that don't demand much of the drinker. A few more bucks get you the classier Aruma 2013 Malbec, a collaboration between Argentina's Catena and France's Barons de Rothschild. And some searching will turn up an inky Cahors from malbec's French birthplace — in which case, add bacon.

Hot Dogs: Dogs and Domaines? Why not. The crus bourgeois from Bordeaux's left bank represent real value, and the 2010 Château Donisson Listrac-Medoc's steely, dark fruit (cassis and black raspberry — not that you have to care) will play nicely against a beefy dog. There's some tannin here, so decant this one and consider slitting the pup and sliding in a slice of bleu cheese. Château Donisson is uncharacteristically merlot-dominant; other left-bankers will emphasize cabernet. You might consider grainy Dijon mustard, too.

Pork Ribs: I'm assuming a glaze with some sweetness here. And I'm proposing what might seem a strange drinking buddy: a fizzy red from Northern Italy. Lambruscos are regaining some of their previously damaged reputation thanks to wines such as the non-vintage Puianello Lambrusco dell' Emilia Rosso Amabile. The wine is a lively ruby color, it's got fruit for miles, and its moderate sweetness paired to a buzzy spritz both cuts through and complements the sweet, fatty ribs.

Chicken & Other Fowl: Chardonnay, especially the CA kind, has taken it in the tuckus from writers lately, but grilled chicken may just be its soulmate. A Cali chard such as the 2013 Sean Minor 4B Central Coast, with Granny Smith and pear components, butter notes from malolactic fermentation, but only modest oak and tannin, will cruise right along with a chick. The more mineral-heavy French standout, Jean Marc Brocard's 2012 Kimmeridgien Bourgogne, should sing, too.

Skewered, Spicy Shrimp: There are also lots of options here. Texas viognier is one such — the pioneering bottlings from Becker Vineyards are especially to be prized for their floral, honeysuckle and melon attributes. A new and intriguing release from Pilot Knob is made in Texas from CA grapes matured in acacia wood barrels. But if your shrimp are seriously spicy, go instead with Washington State's Kung Fu Girl Riesling — it wraps its floral frame in gossamer sweetness. The chile doesn't stand a chance.