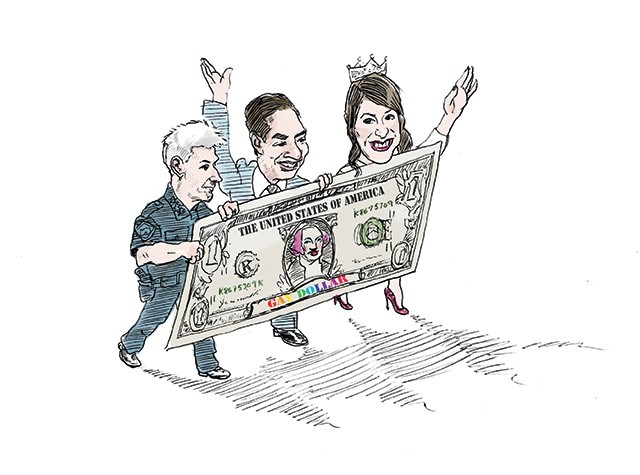 Money talks, but does it make a sound if no one is listening? San Antonio LGBT consumers pack enough buying power to bankroll the entire city budget for a year and a half. Yet in many cases here, they’re still fighting for full citizenship in both the workplace and public policy.

Studies have shown that the LGBT community overwhelmingly prefers to spend on products from companies that are LGBT-friendly in their workplace policies and which advertise in gay media. They also favor living in and traveling to places with fair and inclusive public policies. In the press release accompanying the 2012 estimate, Witeck Communications observes: “Buying power projections may be seen as an accepted business measure for companies and policy decision-makers.”

Nevertheless, that buying power does not appear to have translated into LGBT economic or political muscle in River City. On the 2012 Municipal Equality Index, an LGBT-rights report card for U.S. cities published by the Human Rights Campaign Foundation (HRCF), San Antonio scored a mere 42 out of 100 — ranking below five cities in Texas and beating only Arlington. (Austin led the state with a score of 91.)

On a separate index produced by the HRCF, the 2013 Corporate Equality Index, LGBT influence also appears feeble in San Antonio’s unenlightened business sphere. In this widely disseminated report, companies are graded according to such workplace policies as prohibiting discrimination based on sexual orientation or legal recognition of same-sex couples.

Nationally, 110 of the Fortune 500-ranked businesses achieved a perfect 100; the average score across all companies now stands at 81. Companies headquartered locally? A meager 27 average index score. The city’s two largest private employers, H-E-B and USAA, achieved 40 points and 0 points, respectively. According to H-E-B’s Dya Campos, the company does not participate in any surveys. USAA spokesperson Roger Wildermuth said “As a well-known and highly regarded organization, we receive numerous requests to participate in various types of surveys every year and unfortunately, it’s not possible to participate in all surveys. We generally focus on benchmarking surveys that help us serve our members better.”

As Witeck Communications President Bob Witeck notes, “DPI, or disposable personal income, does not translate directly into economic or political clout ordinarily, unless the community is very visible, active in the community, and has some context and engagement.”

A Move To Main Street

In U.S. cities with prominent LGBT communities, the oldest LGBT-related parades, business chambers, and community centers date back for decades and have become woven into a diverse urban fabric.

Here, in contrast, as recently as 2007 hostile homophobes stormed City Hall to protest Police Chief William McManus’ decision to serve as grand marshal of the Pride Parade. “It has been a struggle,” says Pride San Antonio Board Secretary James Poindexter. “San Antonio is a very, very conservative city, with a long-time military presence, a strong religious presence. We’ve had to work within that type of social environment for many years.”

The good news is that the San Antonio LGBT community has been increasingly visible and active in the proximate past, raising pocketbook power potential. The community organization Pride Center, founded in 2010, expects to find a home before year-end. Pride San Antonio officially incorporated in 2011 and has seen parade entrants skyrocket; for the June 29 Pride Parade, Miss Fiesta 2013 Victoria Flores will serve as grand marshal. The San Antonio LGBT Chamber of Commerce, celebrating five years since its foundation, has evolved from a modest networking association to a fast-growing organization with 140 members and outreach goals threading across the city.

The Chamber is also working with Greenup to organize the first Main Street Music Festival in October. The festival forms part of the chamber’s longer-range vision for recasting the North Main Street gay bar strip as part of a more integral identity neighborhood in Tobin Hill. With the city’s pledged logistical support, organizers hope to draw out-of-town visitors to the festival and swell crowds to as many as 6,000 attendees. The goal of attracting LGBT tourism dollars on top of local LGBT-spending attests to the community’s comprehensive vision of economic relevance.

“If you go on Google and search for ‘LGBT travel’ I doubt that San Antonio is going to be high ranking,” says Robert Salcido, vice president of the San Antonio LGBT Chamber of Commerce. “That is something that we are striving to change.”