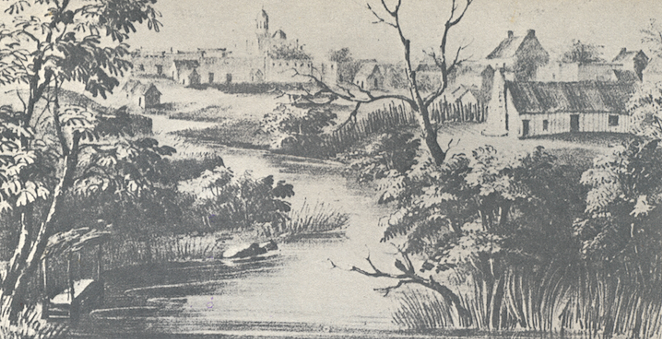 Courtesy
This year, San Antonio celebrates its 300th birthday, based on the date when Spanish explorers and missionaries established the Mission San Antonio de Valero — now called the Alamo. But let’s not pretend that was the beginning of civilization in South Texas.

When Spaniards first stumbled upon Bexar County’s lush ecosystem in the late 1600s, it was already occupied by a small thriving community of its own: the Payaya Indians. The Payaya, which had roots going back some 10,000 years, had settled around San Pedro Springs in a village called Yanaguana. The Payaya are also referred to as Coahuiltecans, which is a collective name for the many small, autonomous indigenous tribes that inhabited South Texas and northern Mexico.

While the tribe and other nearby Coahuiltecans were quickly rounded up by Catholic missionaries and forced to convert, these ancient cultures didn’t evaporate with the attempted erasure. Many descendants of the Coahuiltecans still live in the same plot of land that their ancestors once occupied, just blocks from San Antonio’s historic missions.

Ramon Vasquez, director of American Indians in Texas at the Spanish Colonial Missions, has spent decades working to remind San Antonians that these populations still exist.

“We have such a hard time getting people to realize that our families are still here contributing to this society,” he says. “Most of our work is just un-erasing our community.”

With a population of over 18,000, San Antonio has the 10th largest population of Native Americans in the United States, according to the National Urban Indian Family Coalition. Vasquez is hoping 2018’s Tricentennial events hosted by his organization will help shine a light on the region’s oldest ancestors.

“We’re going to participate and we going to tell our story,” Vasquez says. “But — what happens after the Tricentennial? After the year is over? Are we going to look at policies that help San Antonio’s Indian population? It can’t end there.”

Under the guidance of San Antonio’s new mayor, Ron Nirenberg, the city has spent the past year creating policy to establish economic equity across disparate neighborhoods. Vasquez says he hopes city officials include “cultural equity” into that equation to lift low-income residents with Coahuiltecan heritage. He said that in San Antonio (and most cities), Native Americans are disproportionately living in poverty.

It’s important, he added, to remember that the city’s 300th anniversary marks the beginning of Spanish colonization — meaning the end of Coahuiltecan villages and with it, their cultural freedom.

“We have to ask ourselves, ‘What are we celebrating?’ And we must be mindful of that,” Vasquez says. “I hope during the Tricentennial, we build in just as much time for healing opportunities for the native people as we do for celebrations.”