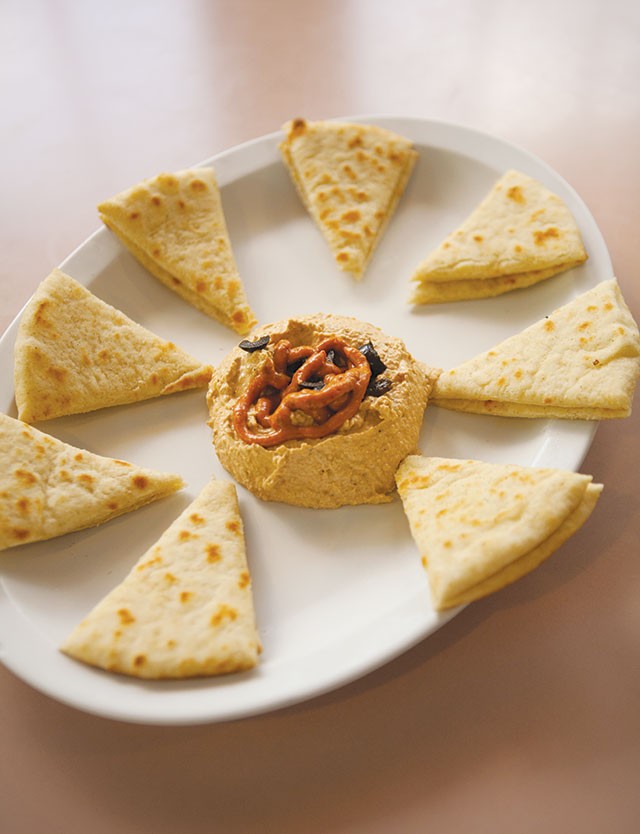 The creamy chipotle sauce that comes with some orders gives credence to Casa del Kabob’s mash-up name, but once inside the door, the place’s Persian/Mediterranean emphasis becomes clear: there’s hummus and falafel; there are kabobs and gyros; there are exotic Persian stews of eggplant and beef … and there’s a colorful mural of a paradisiacal valley.

Temptations of the culinary kind include the simple, but excellent, falafel made with chickpeas alone, not with the additional ground fava beans that are traditional in some parts of the Middle East

As the fried falafel balls come with the same lettuce and tomato salad that adorns many a Tex-Mex plate, they could be a small meal on their own. Resist the urge to pump out culturally inappropriate ketchup for the giant spears of seasoned potato that accompany some larger plates and wraps, the flavorful fries really don’t need anything. We wouldn’t add a thing to the thigh wrap either, in fact, it was almost necessary to remove a little of the “salad” to get down to the chunks of well-seasoned, marinated chicken, additionally moistened with the mild yogurt/cucumber sauce.

Casa del Kabob’s eggplant babaganoush is a dependable staple, as is the sometime-special lamb shank with green basmati rice. Though it won’t win any beauty prizes, the murky but intensely earthy ghourmehsabzi is a surefire Miss Congeniality bet. Unlike the gyro, which has been around long enough that we frankly should be able to say it right (repeat after us: year-oh), we can be given a pass on the pronunciation of this beefy, herby stew.

Service can be a little slow at noon, but it’s unfailingly cordial at all times, and in that Casa del Kabob is also a reflection of typical Middle-Eastern hospitality.