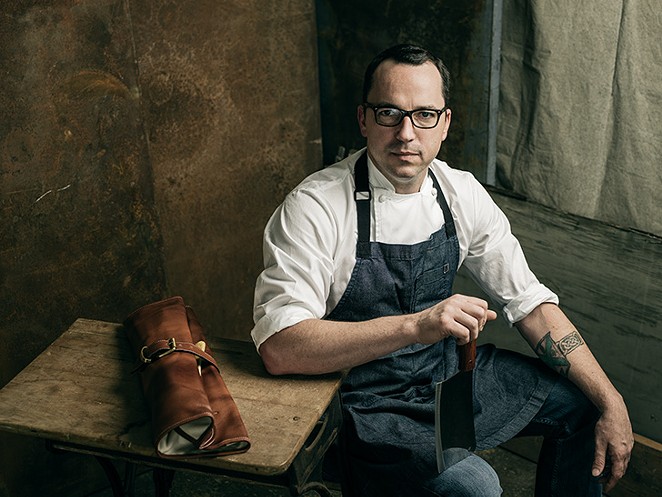 Indigenous culinary traditions have defined our area for centuries, long before San Antonio’s 1718 founding. Those indigenous culinary roots are still alive — they can be found in community and restaurant gardens, local dishes and ingredients — but the chefs that are most closely identified with the city have just begun to highlight that history, and ongoing cultural evolution, in our food.

San Antonio chefs are venturing beyond the delicious but expected Tex-Mex standards and outdated ideas of “authentic” food culture to create new dishes that are forged by the elements earth, fire and water.

Johnny Hernandez
Hernandez is among the leading chefs in San Antonio to have graduated from the Culinary Institute of America (CIA) with a focus on sustainability, celebration of native plants and understanding of how dishes fit into larger regional and national food conversations. “Over the last five years, we’ve been diving into [dining and culinary experiences] with more precision and knowledge and a broader understanding of our food heritage,” he said. Hernandez has built a restaurant empire that includes La Gloria, Burgerteca, Villa Rica and a new dining concept — expected to revitalize La Villita’s Maverick Plaza — slated to open by 2021.

“I think that everything I have done and continue to do will always be part of our [city’s] food heritage, always with a special connection to Mexico; it’s where our family comes from,” Hernandez said. “We’re seeing where cuisines and cultures from countries like Germany and Spain intersect with the indigenous and pre-Hispanic techniques and flavors. It shows that we need chefs to understand and be mindful of our local cuisine and our food community.”

Elizabeth Johnson
San Antonio is one of two U.S. cities to receive designation as a UNESCO Creative City of Gastronomy, and culinary leaders like chef Elizabeth Johnson helped the city reach that milestone. Johnson, who trained at the CIA and worked as an instructor at the San Antonio campus, celebrates the area’s indigenous roots through healthy, colorful dishes made with native ingredients and plants of the land. At her restaurant Pharm Table, diners can expect to find dishes and beverages that reaffirm the idea that “food is medicine.”

Diego Galicia & Rico Torres
It wasn’t long ago that mainstream American food culture (incorrectly) positioned Mexican food as cheap and fast dining, but Mixtli has helped to correct that misconception. At Mixtli, chefs Diego Galicia and Rico Torres explore regional Mexican food, recognizing the indigenous traditions, ingredients and flavors that have shaped and elevated modern dining culture, and asserting that Mexican cuisine is something worth celebrating.

Steve McHugh
Chef Steve McHugh could easily represent any of the elements at Cured, but flames are essential to many memorable plates like the fried oysters and beer-can mussels or the house pork chop with grits — all prepared with flames, fresh ingredients, New Orleans traditions and Southwestern flavors.

Jason Dady
Jason Dady was born into a food business family — his grandparents owned a tavern in Nebraska, and he picked up knife skills from his grandfather, a master butcher, before attending school at Texas Tech and working in kitchens throughout the nation. He launched his San Antonio career at the Lodge Restaurant of Castle Hills in 2001, and has since expanded his chef-driven dining empire to include Range, Tre Trattoria, Shuck Shack and Alamo BBQ — all with special understanding of how heat can transform food to a memorable dining experience.

Michael Sohocki
Whether he’s cooking pre-industrial revolution-style at Restaurant Gwendolyn, firing up pizzas at Il Forno or serving some of the city’s best ramen at Kimura, chef Michael Sohocki uses fire to deliver an incredible meal. Sohocki, who works with local farmers to secure the best ingredients and products available, delivers a unique experience for guests every time.

Bruce Auden
Auden was only 17 when he left North London and pursued a culinary education and career in the states, but he quickly rose as a chef-to-watch at restaurants in Chicago, Dallas and Houston before arriving on the San Antonio scene in the mid-’80s. Auden launched his own restaurant — combining classic culinary techniques, Southwestern traditions and global influences — with Biga in 1991. For more than 25 years, Biga (renamed Biga on the Banks upon relocating to the River Walk in 2000) has inspired several generations of San Antonio chefs and diners to take pride in the city’s culinary roots — and to venture outside of the expected.

Lisa Astorga-Watel
At Bite, chef Lisa Astorga-Watel serves rich and colorful meals — inspired by her Chilean family, Texas education and jobs in kitchens across the world — such as the crabmeat risotto, sourced from the Gulf, and the roasted Chilean sea bass, and she understands why this is a unique time to be a chef in San Antonio. “We have a new space that didn’t exist just a few years ago; people are paying attention to the things we serve, the food we create,” she said. “It’s exciting to see [elements] work well together.”

Andrew Weissman
Chef Andrew Weissman, a San Antonio native, graduated from the CIA and worked in French kitchens before he returned home to open Le Rêve — a restaurant that helped revitalize San Antonio’s culinary scene — in 1998. He went on to open (and close) several influential local restaurants including Sandbar and Osteria Il Sogno, but Weissman has established Moshe’s Golden Falafel, the Luxury and Signature as fixtures within the local dining community. Signature highlights the best of East Coast and Gulf Coast seafood in dishes like the butter-poached lobster and crispy Texas prawns.