IAIR 12.3: Is there truth in photography? 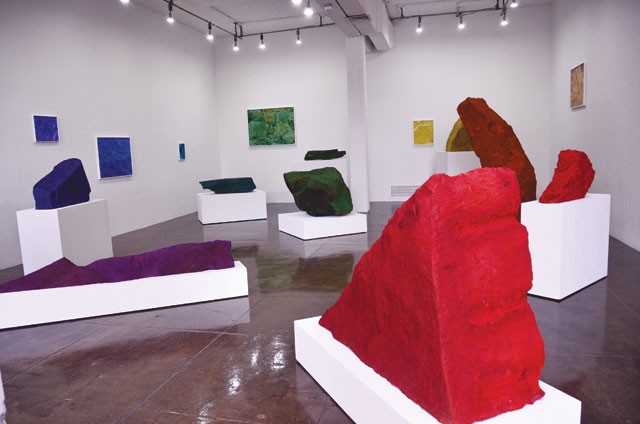 Artpace's current International Artists-in-Residence presents works by three artists who share a common interest: photography. Indeed, the residency's guest curator Heidi Zuckerman Jacobson, director and chief curator of the Aspen Art Museum, stated during a reception for the press last week that she chose the artists specifically for their photographic pursuits. But this being Artpace, don't expect to see the usual photographers' portfolio review. Each exhibit, the result of three months work at the SA bastion of contemporary art, blends photography with other media and is attuned to concerns that go beyond image making. Nonetheless, this trio of works is exemplary in continuing the examination of photography's long-held obsession. Is the image true?

David Benjamin Sherry of Los Angeles presents a collection of darkroom-made prints of wind-carved rock formations, recorded in national parks throughout the West on a traditional 4-by-5 film camera. Set within the surround of brilliantly colored photographs, each dominated by a single hue, are large — very large — slabs of rock stained in shades of red, violet, ochre, or green, that echo the acid colors lining the walls. The monochromatic treatment exaggerates the minutia of the rock surfaces, revealing the grain of the stone as well as the edges of holes drilled in the rock to free the angular blocks. Standing among the photographs like ancient markers, the monoliths merge the experience of the natural rock source with knowledge of the labor that has prised them from their sites. The extreme colors of the prints are, says Sherry, achieved without digital manipulation, using instead filters that reveal extreme versions of naturally occurring hues found in the stone. These are then, truthful records — true as visions.

San Antonio-based artist Sarah Sudhoff revisits her perennial interest in the gritty details of medicine with a series of large format prints of the output from industrial autoclave processing. Medical waste — disposable syringes, blood stained bandages, and the like, are compressed at high pressure and heated to approximately 250 degrees Fahrenheit to kill off pathogens. The sterilized material is then safe for landfill. Shredded or pulverized, the material is also sold as cheap, high-BTU fuel, or used as filler in concrete. A wood bench with a seat of autoclaved component concrete accompanies the photographs. Highlighted by the vibrant red and blue plastic in the mix, the prints of autoclaved material seem images of confetti-adorned sculptures, or when printed in enlarged detail, brilliantly colored tooled engravings of abstract forms. Like Sherry's landscape photographs, the brilliance of Sudhoff's naturally-rendered prints is extreme, and clashes with our accustomed notions of drab hospital rooms. When a syringe pops in view within the mix, emotional threats that might follow the ominous form seem truly sterile, if not quite removed.

Dor Guez, a Jerusalem-born photographer and video artist of Tunisian Jewish and Christian Palestinian descent, presents a video depicting a visit to relatives in Lod, Israel. Photographs are brought out depicting recent vandalism to tombs in the local Eastern Orthodox cemetery. Headstones of passed family members have been overturned, the tops of crypts removed, exposing bones. The photographs, which were taken to show the wanton destruction to local officials, were returned to the family several years ago after no findings or conclusions were made of the incident. Taken from a drawer, they stick to each other and tear when separated, as if in memory of the brutal population removals that have plagued the region. Interspersed with the visit are views of Lod, including the cemetery, and documentation of a mass. The priest, perhaps assigned from northern lands, reads the liturgy in Arabic from a sheet of paper. On the walls of the exhibition room are photographs made by Guez of the originals depicted in the video. The pictures' torn edges are conspicuous as white scars. They are portraits of memories, blurred and confusing to a casual visitor, but still give evidence to the history of violence that plagues a land of many peoples who once lived as neighbors.

The truth of photography is, of course, in the picture itself. Made with innocence or guile, it occupies a square of space like a memory revealed, and in this constancy through time, has the power to complicate or embolden the stories we tell ourselves of what is real, why things happen, or who is finally to blame.