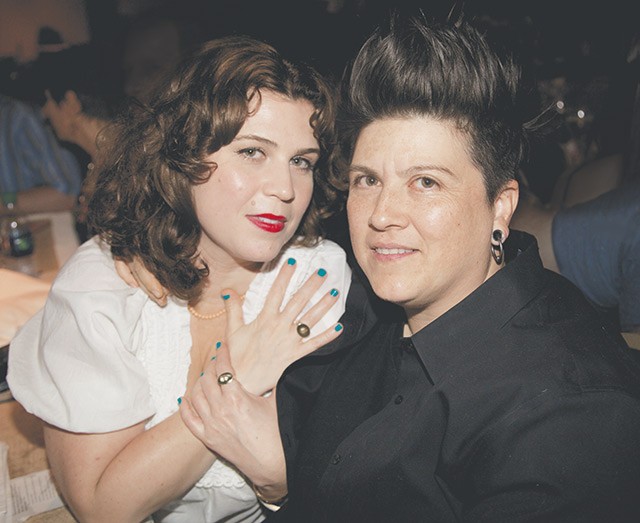 An illustrative story about Kristy Perez: She exhibited her sculptural work this year as part of “Bruit rose” at Maison Populaire, a contemporary art center in Paris. Her piece Fight! began when she found an old crutch on a trash heap near her Southtown studio. She decided to reify the crutch by covering it in 24-karat gold leaf. After she gilded this crutch, though, she hated it; she then attacked the gilded crutch with a kind of anti-craft, laying waste to waste, physically removing each layer of built-up material, reverse engineering down to the wood, which is itself burled and complex and beautiful. The process was a huge pain in the ass, but she bent to it, and it eventually represented in Paris, where she devised a stand installed into the gallery floor so that the crutch appeared to stand on its own.

Perez’s partner Britt Lorraine grew up, in part, tending cattle on her grandmother’s ranch in East Texas, where at the age of seven or eight she also aided her dad, a football coach, by acting as “waterboy” during hometown matches. She loved the players, the tension and excitement of the games, and working hard doing something physical alongside her dad. After a time, her father informed her that she could no longer do her job, and by way of reason, explained that she couldn’t be a waterboy but that she could be an off-field mascot; no girls on the field. It’s a slightly baffling, slightly abstract story with absurdist reasoning—the triangle of girl-mascot-waterboy, what their overlap was and what taboo she’d be breaking. As an adult, Lorraine has decided it was his way to obfuscate the in-your-face sexism within small-town community disapproval.

Nevertheless, Lorraine continued to embrace physical work and abstract ideation, studying dance at Southern Methodist University, earning an MFA from the University of Iowa and founding the dance company Saintlorraine in 2007. Eschewing traditional costuming and virtuosic solos, Lorraine’s choreography and performances take on the repetition of physical labor and finesse it with a staunch, strong shouldered-femininity. She performs in specialized street clothes, draped to support her gestures, her choreography also making daily toil a kind of prayer, unfussy, relatable, easy to internalize, hard to forget.

Together, Perez and Lorraine have created several performance installations. Perez assists in the concept and execution of the visual components like the set, while Lorraine choreographs and performs.

On her website, Perez writes, “As artists it is imperative that we create confrontational spaces in order to make room for pause so that there exists the potential for beauty to be uncovered in places and in moments that would normally go unnoticed.”

They made such a moment with us at Liberty Bar, in celebration of Pride.

How conscious are you of yourselves as a couple in public?

Britt Lorraine: I feel like the act of being together—although we like to stay in with the curtains drawn—the minute you open the door and walk outside, you are being “loud.” The act of us deciding to be together and live together and walking out the door is loud and it does bring the private public.

Kristy Perez: I think that we are aware of that, aware of it completely. And for me personally, I recognize and respect the fact that every LGBT person that is out and taking part in this crazy world is doing that, you know, with everything they do. And we don’t always speak about that—but we give each other a little cheer before we go out the door; “Alright, are you ready to do this?” We don’t like to go around living our lives like “Oh, we’re the victims.” But the fact is, you’re going to run into confrontational shit sometimes.

Do y’all feel like, with a new relationship, you navigate gender roles? Are there certain arenas that are thought of as masculine or feminine that you negotiate?

KP: I think we like to role-play, but I think it’s pretty even as regards to who wears the pants.

The way you visually present, in particular through social media, as a male-female gender dynamic, that’s very interesting.

KP: Well, we love that. We embrace that. Plus, it’s sexy to each other, for each other.

BL: I’ve always felt that getting dressed, living is the ultimate performance. So that when I choose to look a certain way, it’s not by accident. What you wear is a choice, and relates to your life [as] a performative act. That said, I hate dance costumes. [Laughs.]

Your collaborations, there’s an intimate side; how do you allow for the inevitable conflicts that come with working together as artists? Can it mess with your personal life?

BL: It isn’t always easy; I was just recently watching the video Kristy did of a performance. And it was so perfect, and had so many elements of her visual work in it, which, of course, it is. But the preparations take everything out of me, and then there’s the money issue. [Turns to Perez], maybe you’d be better [at] talking about me. [Laughs.]

KP: In terms of her preparation, she’s really kind of like an athlete training, right up until it’s the moment to perform. About our work—it’s really an experiment. Which is why it’s so stressful. I try my darndest to make it look like an installation I would do in a gallery space. Then add the love of your life who is also a powerful artist coming in there … Her own elements, it’s just really nerve-racking. But being with someone who has her kind of confidence, it’s so rewarding.

Do you talk about marriage? Is it a plan that you think about pursuing?

BL: It should absolutely be legal. Once the action is legal, culturally, things will start to change. On the other hand, though, I don’t feel like we’ve got anything to prove.

KP: I’m ambivalent about it because the institution itself was founded in patriarchy. And I’m sensitive to becoming part of the homogenized culture. I can’t imagine being more committed than we are. I’m not going anywhere. On the other hand, there would be legal advantages, financial advantages, and for our kid.

Did you have any hesitation about becoming involved in a relationship with Britt [since] a child is part of the equation? [Ava, now 13]

KP: I knew everything would change for me. But then I said to myself, “Who are you fooling? You’re so in love with this woman, you can deal with anything that comes to the table.”

Is there anything unexpected about parenting that you’ve encountered?

BL: Everybody says that about her child, but she really is. [They both laugh.]

KP: And I don’t want to be one of those gushing parents, and when parents do that it kinda makes me want to throw up. This is going to sound weird, but sometimes I feel more maternal than Britt.

BL: I would totally agree with that. And Ava and I are getting closer as we’re both getting older. [Early on, when she was really little] it was very important to me to model for her that you don’t live your life in order to please other people, including me. But the best way to teach her that wasn’t to tell her that, but to do it. That’s in art, in life. Through action.