Saturation Point: Is the Growing Number of Craft Brewers Too Much of a Good Thing? 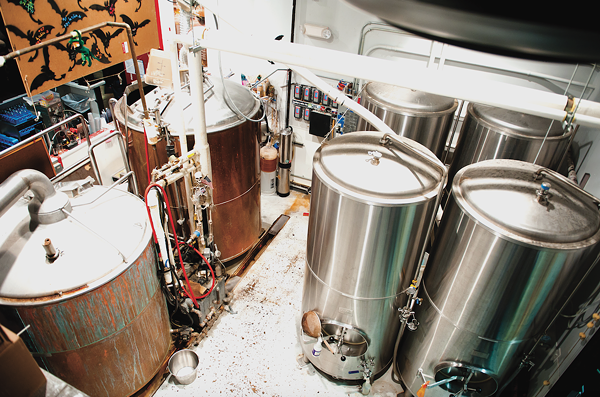 Can there be such a thing as too much good beer?

Turns out, maybe so.

Even though craft beer consumption is growing, 165 U.S. craft breweries closed last year — an increase of nearly 70 percent from the prior year. And the San Antonio area has seen casualties with last year’s shuttering of Branchline Brewing and the sale of Pedernales Brewing in Fredericksburg to an Austin outfit.

Local brewers say there’s still room for growth, but with a dozen or so production breweries and brewpubs now operating in the Alamo City, it’s harder and harder to stand out in the crowded market.

“It’s become much more competitive, much harder to make a profit,” said Dennis Rylander, a partner in Ranger Creek Brewing & Distilling, which cranks out not just beer but a line of whiskies.

So, what happens then? Are local breweries going to stop filling kegs and sell off their kettles?

Nope. The answer for most is to hunker down, focus on the home market and realize that staying small is probably their smartest business decision.

Getting into out-of-town bars and groceries is a challenge — especially without a major distributor or the ability to spend big on sales reps and ads. And some Texas markets are already too crowded. Austin, for example, has three times as many breweries as San Antonio.

Not to mention, locally owned breweries must battle for shelf space against one-time independents that have been gobbled up by the majors. Houston’s Karbach Brewing Co., is now owned by Anheuser-Busch InBev, for example, and DFW’s Revolver Brewing is now a MillerCoors property.

So, like other local breweries, Ranger Creek has scaled back plans to become a statewide powerhouse — at least for now. It continues to sell in other markets, but its primary focus is S.A. “It’s a lot easier for us to win in San Antonio,” Rylander said. “People know us, and they like to support something local. You just get better return in your home market.”

But scaling back statewide or regional ambitions can make for some tough business decisions, said Bart Watson, economist for the Brewers Association, which represents craft brewers nationally. Some brewers may need to cut staff as they settle for slimmer profit margins. Others may be forced to mothball expansion plans or realize their revised expectations will only put food on the table for two of its partners, not three.

“Our hope is that brewers had those conversations before they get to this point,” Watson said.

While the craft beer market has gotten more competitive, no one’s predicting a sales slump. Not yet, anyway.

To the contrary, craft beer’s overall volume increased 5 percent last year, according to the Brewers Association. In contrast, the total beer market — still dominated by mass-produced suds like Budweiser and PBR — dropped by 1 percent.

And Texas especially may have room to grow.

Nationally, craft brews still represent less than 13 percent of the overall beer market. And that percentage is likely lower in Texas where light mass-produced lagers still enjoy a sturdy following.

With 251 craft breweries, the Lone Star State ranks ninth in terms of sheer number, according to the Brewers Association. But per capita, it’s 46th, since it has just 1.3 breweries for every 100,000 drinking-age residents.

In contrast, Vermont, the state with the highest per-capita total, boasts 11.5 breweries for every 100,000. Second-ranked Montana has 9.6 per capita.

Eugene Simor, CEO of Alamo Beer Co., said the biggest challenge for the city’s craft brewers isn’t edging other homegrown brands off the shelves but convincing drinkers of mass-produced beers to give local products a try. Like Ranger Creek, Alamo has refocused on its home market, although it still has long-term designs on growing its statewide market share.

But with local breweries’ limited marketing budgets, there’s no fast way to chip away at the big guys’ market share, he concedes. For the most part, growth comes organically, when new customers take brewery tours, sample at their favorite bar or restaurant or take a chance on the grocery store shelves.

“Our craft brewers have a long way to go before the general population realizes we exist,” Simor said. “People like to talk about how the local brewers are in competition with each other, but in reality, our biggest competition is ignorance.”

If production breweries are feeling a squeeze, not so among brewpubs.

There, the model is different — it’s more governed by the rules of retail. If a brewpub can offer good service and food to go with well-crafted beer, it’s able to avoid the headaches of competing for a grocery presence and lining up distributors.

“If I was going to open up something right now, I’d open up a brewpub,” said Jason Davis, brewing director for Freetail Brewing Co., which started with a single brewpub before expanding into the production side. “There’s more money to be made selling directly to the customer, and it’s tough to get space on the shelves.”

Plus, unlike Portland or Seattle, it’s not like there’s a brewpub on every San Antonio street corner. There’s still room to grow in the geographically diverse city.

Take, for instance, Künstler Brewing Co., which recently placed second with its spiced porter Chamuco at this year’s Great American Beer Festival. The brewpub diversifies its lineup of beers constantly and hosts all manner of events from its post on LaChapelle Street off South Flores.

The main challenge is building an interest in craft beer in neighborhoods where it hasn’t yet been entrenched, said Jason Gonzales, owner of Mad Pecker Brewing Co., which opened its doors near Sea World three years ago.

“This was Bud, Miller and Coors territory when we moved in,” Gonzales said. “We had to change a lot of palates.”

While brewpubs have the easiest road ahead, there’s light on the horizon for production brewers like Ranger Creek and Alamo.

When the Texas legislature meets next year, production brewers might be allowed to make takeout sales just like brewpubs. Both political parties have signaled their willingness to let that happen, which could give craft brewers yet another important sales avenue.

But in the meantime, they’re also exploring new ways to improve the bottom line.

Alamo Beer, for example, is in talks with other companies about producing their brews on contract to keep its facility at full capacity. Alamo already has experience in that arena, having produced for Branchline after its bankruptcy.

Meanwhile, Ranger Creek is looking for ways to get more customers onsite to take tours and visit its tasting room. While the company’s license doesn’t allow it to sell beer to go, it’s more than happy to sell pints onsite and send customers off with bottles of its whiskey.

Tasting room sales have emerged as the fastest-growing segment of Ranger Creek’s business, and the company is looking for ways to continue expanding. Next month, it’s hosting a Texas music festival and it’s mulling a satellite location.

In addition to supplementing sales the company once hoped to build in other markets, direct interaction with local customers helps build the lasting bond that’s key to its new smaller-is-better strategy.

“We always win when we get customers out here to visit,” Rylander said. “We’re top of mind next time they buy beer, and we’re building brand ambassadors for life.”